Posted on December 6, 2012 by peachandbones

There are many things about Thailand that attract tourists. One of its biggest draws are its beaches. Neither Sarah nor I are big fans of beaches. They usually involve a lot of sitting around baking in the hot sun, with an occasional dip in the ocean. But Thailand’s beaches, specifically those near the town of Krabi on the west coast along the Andaman Sea, have a lot more to offer than, say, the beaches of Florida.

A shot of West and East Railay from above.

This section of Thailand is full of huge limestone cliffs that aren’t found elsewhere in Thailand. These limestone cliffs add a flavor that most other beaches don’t have, and it’s that extra flavor that drew us to the small coastal town of Railay. Though small, Railay packs a good variety of activities, including climbing, kayaking (near the beautiful cliffs), spelunking, snorkeling, short hikes, and of course, lounging on the beach. Also, Railay can only be reached by boat, which adds to its allure.

This is the main mode of transport to Railay. It’s a long tail boat. The name is derived from the long propeller shaft coming off the back of the boat. 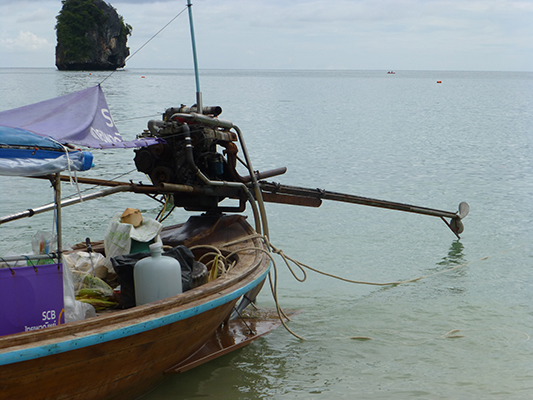 A closer shot of the long tail boat’s propulsion system. It’s a little scary if you’re close to the boats when they lift this thing out of the water.

The workers on the island are ferried from the boats to land using a rolling platform pulled by a tractor. We had to walk through the water.

We went there with the intention of doing a little bit of relaxing on the beach, especially after our Myanmar travels, and climbing. We ended up doing nearly everything but climbing. We’re both climbers and were psyched to climb but, we procrastinated long enough that heavy rains showed up by the time we were ready to commit to renting gear. So, sadly, we didn’t climb. But we’re way out of climbing shape anyway, so there wouldn’t have been much climbing happening. Here are some photos of the climbing we didn’t do. 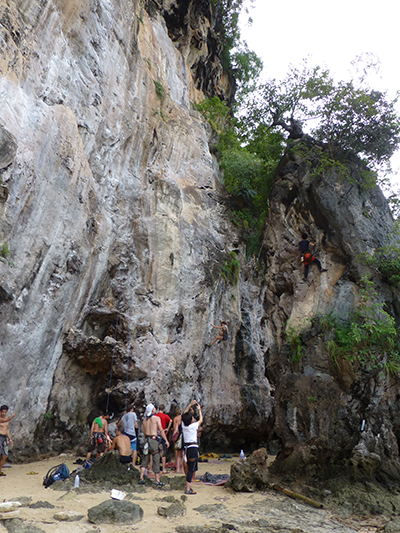 One of the more popular areas for guided climbing. 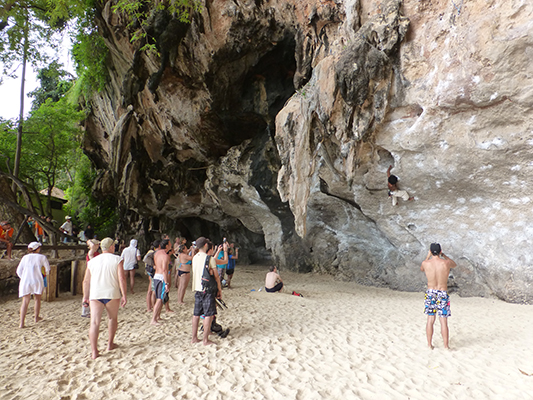 It was common to see beach goers watching climbers. This guy seemed to be a local and was very much performing for the crowd.

More of the climbing performance.

Because of the beautiful scenery, Railay is definitely some of the best beach bumming I’ve ever done. And with the cliff overhangs you could even swim while it was raining. Bonus! 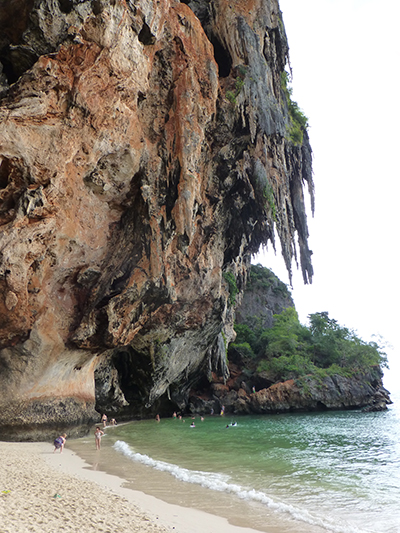 This was one of the coolest areas to swim, solely because of the crazy stalactites hanging overhead. 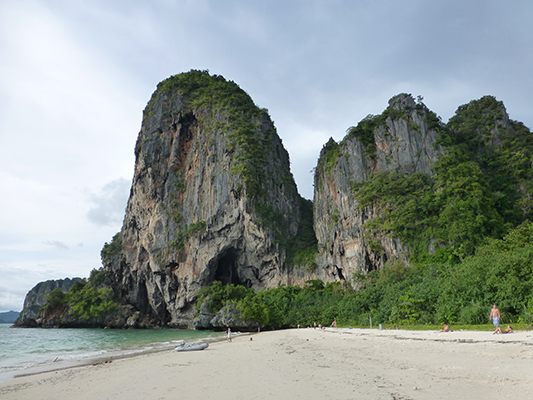 Probably the oddest thing we saw in Railay were the two caves filled with phallic wood carvings. Didn’t really get the story on this but I think it’s some sort of offering local fisherman make to the goddess Phra Nang. 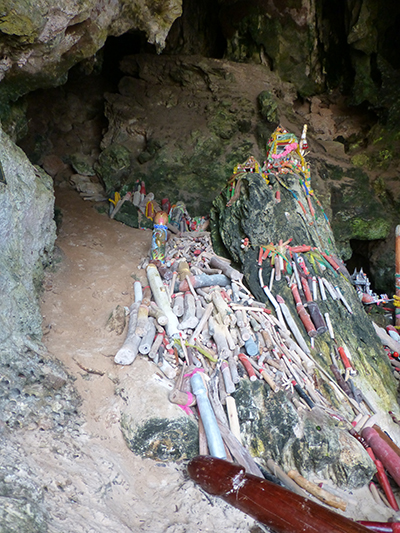 Penis cave 2. It’s not a contest but I think cave 2 has the biggest collection.

The long tail boats also act as portable restaurants, or food trucks of the ocean. Beach area is obviously pretty expensive. So to avoid paying the cost of opening a restaurant on the beach, several boat owners converted their boats to kitchens that they pulled up to the shore each day to sell food.

Pad Thai from the boat kitchen. Cost about 60 Baht ($2). That’s about double of what it costs from a food cart in a bigger city. Everything in Railay was more expensive though. 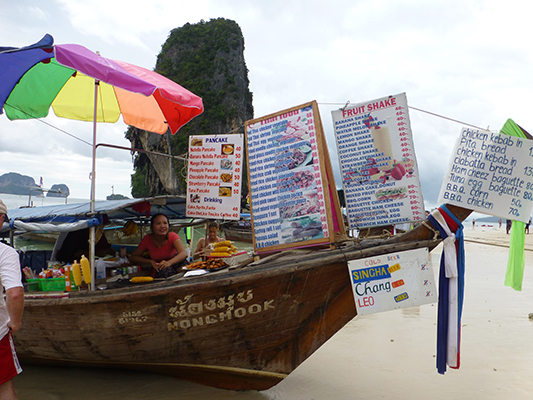 The daily menu. Pretty large for such a small kitchen.

There were even more cliffs further out, completely detached from the mainland. We rented kayaks for a couple hours one day to explore some of them. While checking them out we discovered that surrounding them was crystal clear, shallow water, great for snorkeling. So we decided to do a bit of snorkeling a couple days later.

Unfortunately, we didn’t bring our own snorkeling equipment but were lucky enough to have some lent to us for free by one of the hotels. They felt sorry for us because there wasn’t any for rent anywhere else. Hotels typically provide it for their guests. Our hotel didn’t. This would be a good time to mention how awesome Thai people have been to us during our time in Thailand. They are some of the nicest folks we’ve come across, anywhere. There have been several occasions where someone has spoken up for us or offered help when it was obvious we needed it. 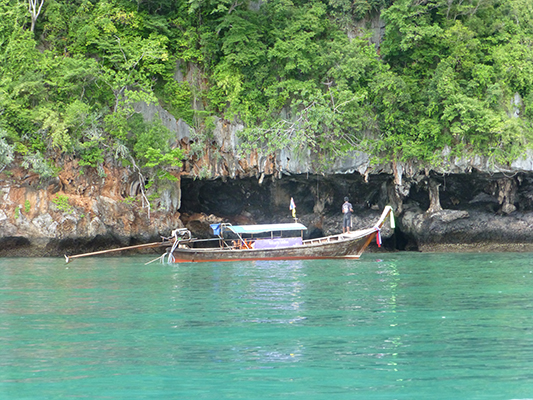 Long tail boat hanging out near one of the small island cliffs.

Sarah leading the way on the kayak. 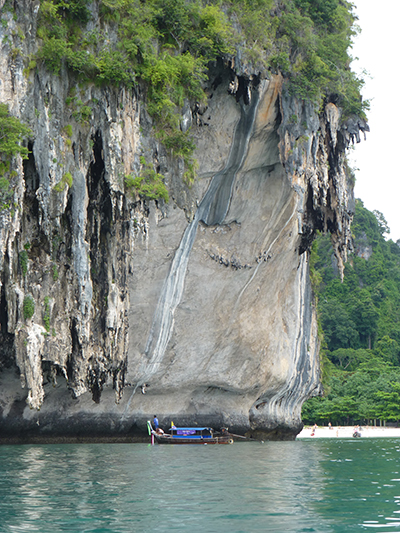 We kept wondering just how often those stalactites break loose.

Being a remote tourist destination, Railay was a little more expensive than some of the other areas we visited in Thailand. The west side of the Railay especially so. That said, we were able to find an affordable bungalow to rent and a couple restaurants that served good, cheap food. Our bungalow only had a fan but, that’s all you really need at night. It cost us 400 Baht ($13) per night. The two restaurants we frequented served great dishes for 60 to 80 Baht ($2-2.75). For comparison, we’ve found street food for around 30 Baht ($1) in Bangkok and other cities in Thailand, and decent rooms as low as 200 Baht ($6.50).

We visited this place the most. We’re not sure why, but we think the owner didn’t like us. Every time after our second visit, he always found a way to make us feel unwelcome. That didn’t stop us from coming though. They had great food at good prices.

Delicious green curry served at Yam Yam Restaurant. Ran us 80 Baht ($2.50). It was so good we splurged. 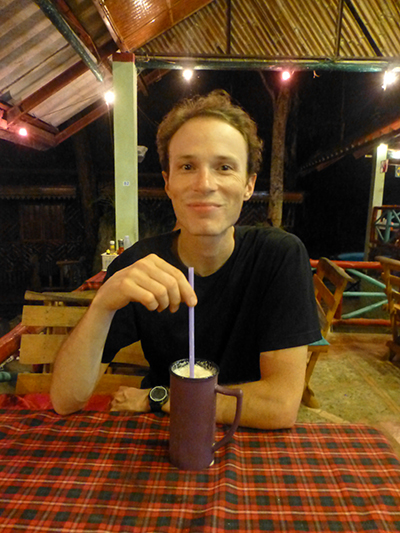 Me enjoying a fruit lassi (fruit and yogurt drink) at Rapala Restaurant.

Railay also has a family of both Macaque and Langur monkeys. The Langurs were pretty chill, seldom seen and stuck to eating leaves. Macaques on the other hand were always making a showing on some part of the island, typically where they had easiest access to food. We witnessed, on a couple occasions, them stealing food from unsuspecting tourists. Anyone carrying a bag that was obviously filled with food was a potential victim of the Macaques. They simply walk straight over to the person and take the bag out of their hand before they know what hit them. It’s really pretty funny. The victims usually found it humorous as well. When’s the last they had a monkey steal their lunch? 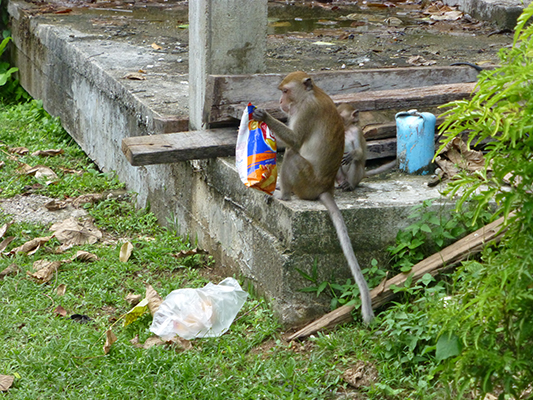 Not so cute, thieving Macaque monkey.

Our last full day in Railay was probably our busiest. I think we spent so much time relaxing that we crammed everything in on the last day. We finally decided to do a trek to a viewpoint on the island that yielded the photo at the top of this post. It also gave Sarah a few scratches and bruises (no surprise there…she’s a peach after all). It had rained heavily the day before, leaving the trail muddy and slippery. We also did the quick walking tour of a popular cave called Diamond Cave. It wasn’t anything spectacular but it was Sarah’s first caving experience.

Should of brought a climbing rope is what she’s thinking.

Finally to the top.

Still unscathed at this point. Only muddy hands. Later she ended up with a scrape and bruise on her knee. Bonus! 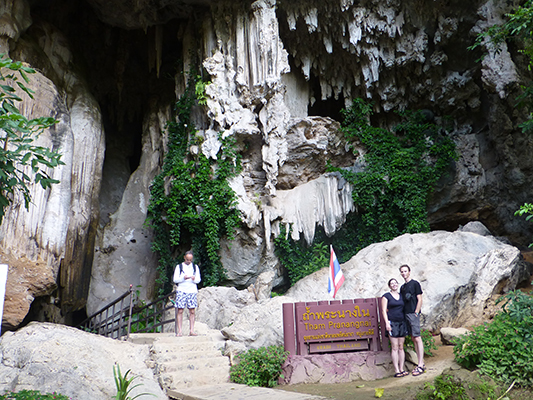 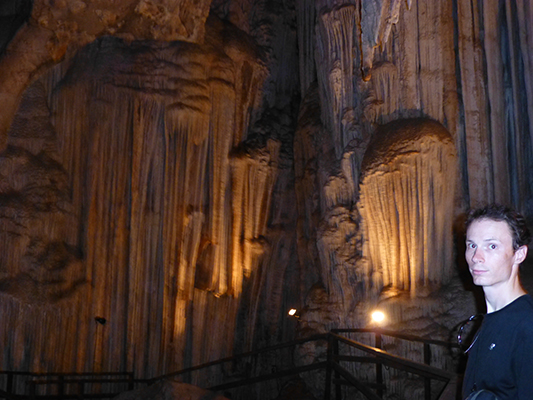 We finished the day off observing the Loy Krathong Festival. It’s a day each year that people of Thailand say thanks to/for the water for all that it provides. At least that’s the story we got. I think there’s more to it, though. People create small floats made of leaves and flowers and send them afloat in rivers, lakes and the ocean. Small translucent hot air balloons are also released into the night sky. To cap the celebration off, one of the local restaurants put on a fire show. We’d witnessed the same show our first night there but didn’t have the camera with us. Basically, a couple of guys perform tricks/routines with lit rods and chains to music. The show is pretty spectacular.

Some of the flower floats in the ocean. 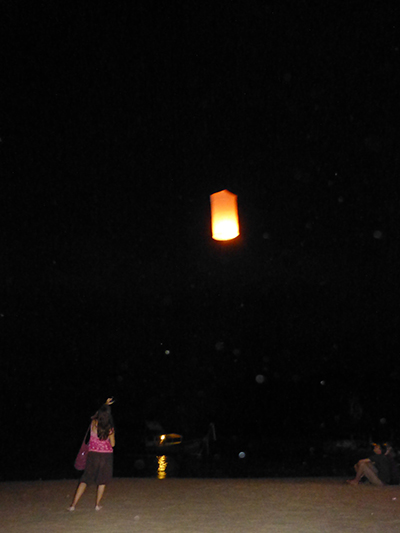 Hot air balloon let loose. This night was particularly windy, making it difficult to light the balloons and causing a few failures.

The fire brothers performing together. 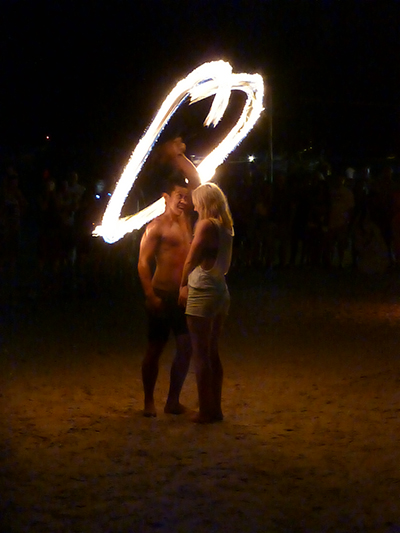 Awhhh, look at that. It’s a heart. Every show they pull in a “volunteer” to twirl fire around their head.

This guy had a shaft lit at both ends.

For the finale he lit a cigarette with the spinning inferno near his head.

Railay was pretty good to us. Maybe we’ll make our way back in the future and partake in some of the world class climbing it has to offer.