Posted on February 16, 2013 by peachandbones

Mumbai is only a short bus ride from Pune, so it was an obvious stop for us on our way to Rajasthan. We’ve met many people who’ve been to Mumbai and who live in Mumbai and say the traffic is bad and all these things which made us think that Mumbai was going to be crazy and over whelming like Kolkata. Our expectations might also have been influenced by reading Shantaram by Gregory David Roberts which is based in the city of Mumbai in the 1980’s. But, we were wrong, again.

Leopolds! This restaurant was one of the main settings in the book.

Mumbai is the cleanest metropolitan city we’ve been to in India. There were not many touts and we could walk around so we avoided all rickshaw drivers. We were both very surprised. I guess, we’ve learned to set our expectations low and that way we can only be surprised and positive about the place when it’s better than our expectations. Ahh, the things you learn when traveling.

Early morning with no cars. 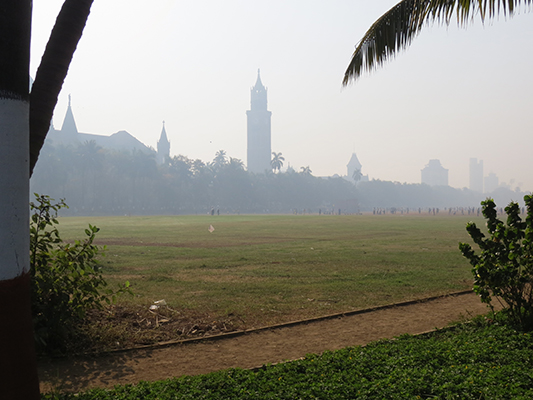 It is also very foggy in Mumbai. All of the mornings and days looked like this.

Big cities tend to be comfortable places for us. We can always find a place that is similar to home-for example, we’ve spent a good day in Starbucks using the free WIFI to catch up on blog posting, you’re welcome-and every time we find a place like that, it’s like we’ve teleported back to the states. It’s good because it reminds us of home and all of the wonderful comforts we have back there, but it can be bad as well. Since we stay in those places so long, we venture out into the real location less often. It’s all about balance. Places like home refresh us enough to keep on experiencing all of the great things these other countries have to offer.

Mumbai was great. It is full of really old, beautiful buildings and landmarks and we got to see how people spend their Sundays playing cricket in the streets. 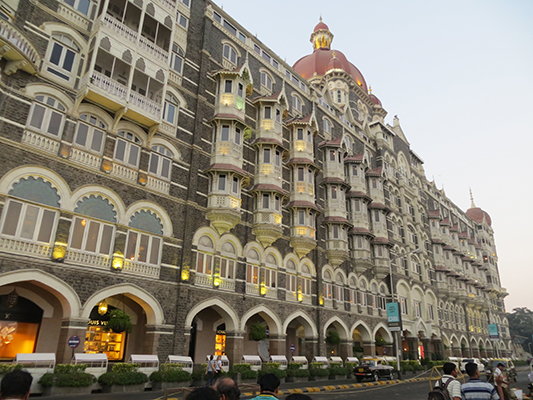 Dusk shot of the Gateway of India. 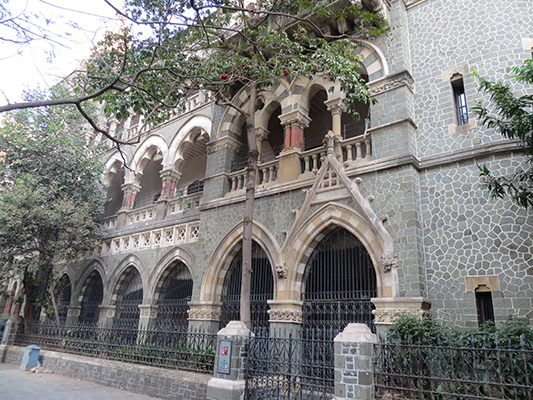 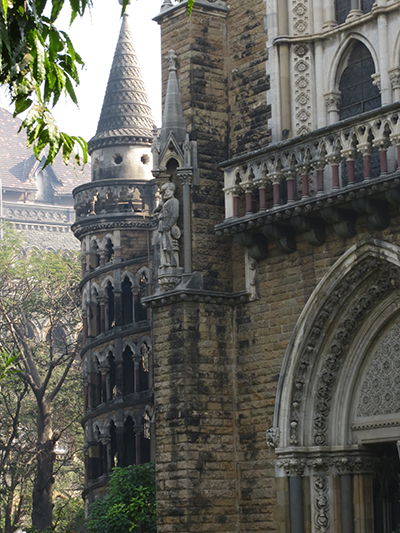 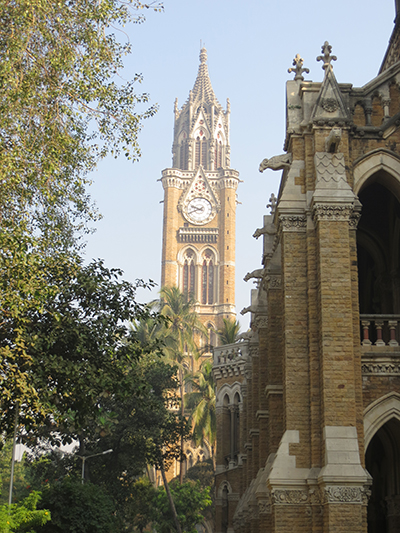 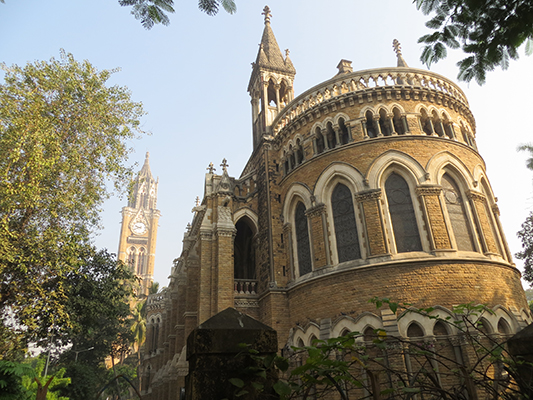 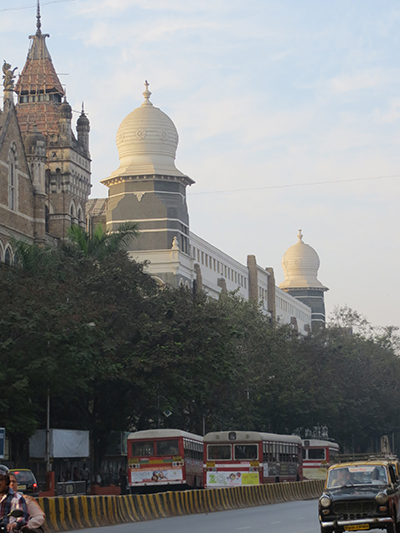 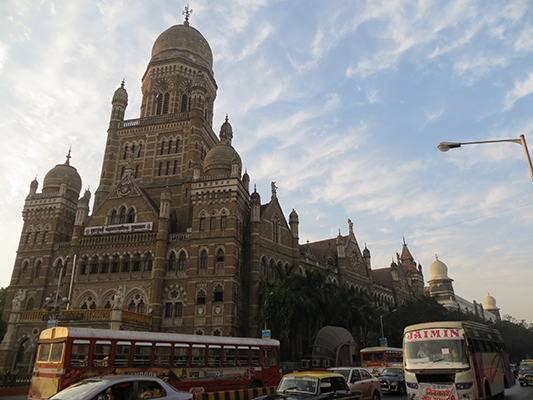 I think this was the foreigners Regional Registration Office. 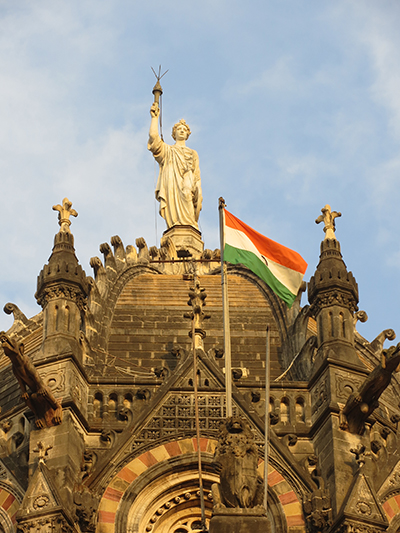 Another one of the victoria station. it was big and beautiful. 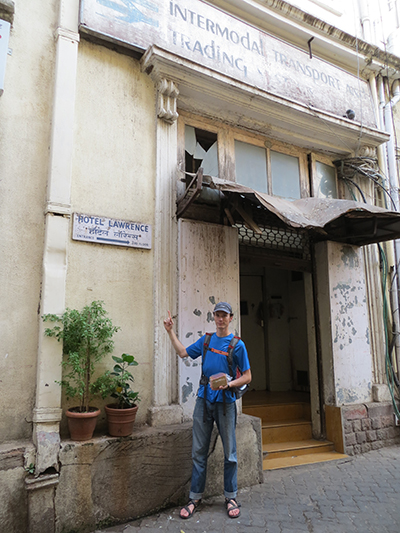 Dave in front of our hotel. It was much nicer inside. I promise.

Crazy wires running every which way.

Cricket in the streets. 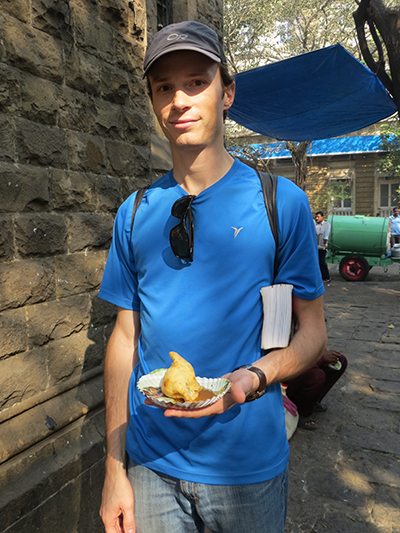 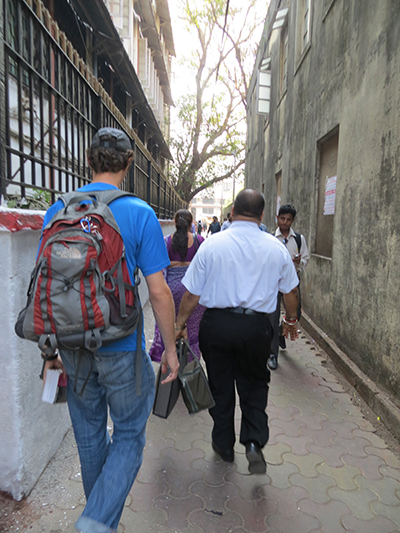 This nice guy told his friend to wait for him while he led us to the tourist office. Also, he didn’t want anything from us! It was awesome.

Dave enjoying coffee at the Indian chain Cafe Coffee Day. We tried to get WIFI there first, but it didn’t work well and was only for an hour. Starbucks worked well and was for 24 hours. Thank you Starbucks.

We also used Mumbai as a place to try to obtain train tickets to our next destination, Udaipur, but there were none available. So we decided on another sleeper bus. The sleeper bus we took didn’t start at an official office or bus stand, it also didn’t start in the center of Mumbai. We had to take a train from Mumbai to the out skirts of Mumbai to catch the bus.

The train we took was PACKED! I think it was the most packed we’ve been in all of India. It was so packed we couldn’t move and therefore we couldn’t see the names of the stops. A kind Indian saw our lost faces and asked which stop we were looking for. He told us how many stops we had. He also encouraged us to get up before our stop-by encouraged he said “get up” and started tapping Dave frantically-he then motioned with a concerned look on his face for us to move closer to to the door. He knew that if we didn’t do this, we would miss our stop because we wouldn’t be able to push to the door. We knew what his look meant, and we also knew from experience that this was the best option for us. So I pushed as far forward as I could, that was two body positions closer to the door, with 10 body positions still between me and the door. Thankfully, there were many other people getting off the same stop, so I was pushed from behind and forced off the train without much effort on my part.

Now that we were off the very busy train we had to find the hotel where the bus would pick us up. After a couple of minutes searching we found the hotel on a very congested and busy street. We asked multiple times to multiple people if we were in the correct location on the correct side of the street. We got both sides of the street for answers, but one side was answered more than the other and it was our original spot, so we went with that side. We were so concerned with being in the correct location because this wasn’t a bus stand. The bus was arriving in the traffic and expected its passengers to board the bus while it was slowly moving in traffic. If we were on the wrong side the bus would move along in traffic and leave us behind without us ever knowing.

Also, these buses didn’t have any sign on the front indicating where they were going. We had met some very helpful rickshaw drivers that seemed to know the bus to Udaipur and assured us we were in the correct location and could indicate which bus it was. We had no other choice but to trust them. Thirty minutes or so after our expected departure time our bus, as indicated by the rickshaw drivers, arrives in the traffic and opens the doors for us. We head out into the traffic with all of our packs on and confirm it’s our bus before jumping aboard. Phew, we made it on.

But, because we boarded the bus while it was moving, we had to keep all of our luggage with us in the sleeper berth. We got creative with our luggage stacking and made it work so we could both sleep “comfortably.” Here’s to our last sleeper bus, we hope.

Waiting for our bus to arrive in all of this traffic. 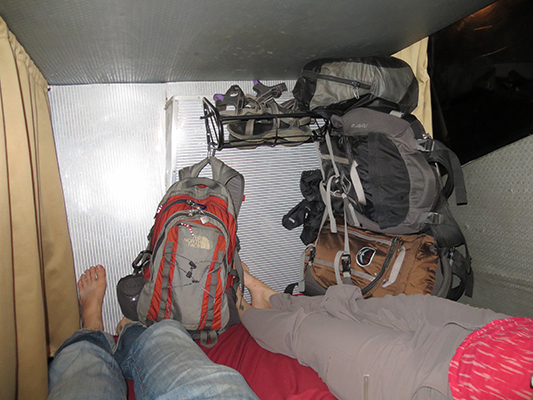