After our week of fun with the family in Phuket, Thailand half of them headed home, but Jen and Paul were able to stick around and join us for the next leg of the journey into Cambodia. The four of us booked it out of Thailand and into Cambodia so that Paul would have enough time to see as much as he could before heading home one week later. It took us only one full day to make our way from Phuket to Siem Reap, Cambodia–the gateway to the ruins of Angkor.

By this point in our trip Sarah and I were seasoned land-border-crossers, but it was a first for Jen and Paul. There’s really not much to it. You get an exit stamp from the country you’re leaving, walk through some sort of buffer zone to a building to pay for and receive your visa, and the finally walk a bit further to get an entry stamp for the country you’re entering. Most of the time this process is pretty straight forward, but occasionally you encounter someone trying to run a scam. In this case the only scam we encountered, but avoided, was a fake visa issuing building that charges double the going rate for a visa. In the case of Cambodia a visa costs about $23, which is what we paid. 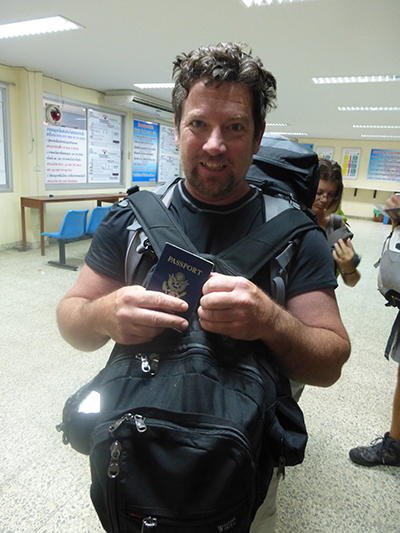 The contrast between Thailand and Cambodia was immediately obvious at the border. As soon as we entered Cambodia the feel of everything changed. Cambodia was less organized, a bit more hectic and there was far more trash lying around. Sarah and I had seen places like this and worse but it was interesting to see it settle in for Jen and Paul. Thailand is a pretty clean and well organized country by most standards, so leaving it and entering Cambodia created a whole new vibe for the trip.

From the border we took a two hour taxi ride to Siem Reap. We researched the trip ahead of time and knew approximately what the two hour journey should cost. With a little negotiating we easily reached that price ($12 per person). Our taxi was a fly Toyota Camry from the early 90’s. Cambodia is full of Toyota Camrys. It seems like it’s the only car on the road at times. Maybe they get some sort of bulk discount. 😉

The taxi driver dropped us on the side of the road in an unknown location where a few tuk tuks (I think they call them Motos in Cambodia) were waiting to receive us. We’d read that the tuk tuk drivers will take you to your hotel for free if you agree to use them as your mode of transport around the Angkor ruins. The ruins area is a massive complex and so this is the most popular and easiest way to see them. Before knowing what the going rate for this “tour” around the ruins was we didn’t want to agree to use these particular tuk tuk drivers. So we instead negotiated on a set price to take us to the hotel of our choice. With the four of us and our luggage we had to hire two tuk tuks.

Instead of taking us to the hotel we requested, and that they originally agreed to take us to, they took us to a different hotel where they presumably hoped to receive a commission for bringing us to. We don’t like to support this kind of tactic and so refused to even look at the rooms and insisted they take us to the hotel we requested. Either because of language barrier issues or shear stubbornness, they wouldn’t take us to the hotel. So we grabbed our bags and walked away without paying them the fare. We quickly found another tuk tuk driver who was willing to take us to the correct hotel and at a reasonable price. Being the nice, honest fella he was, we decided to hire him to be our driver for the next two days to make our way around the Angkor ruins complex.

The Angkor complex contains many temple ruins, with the most well known being Angkor Wat. We spent two full days touring the temples via tuk tuk and walking. Both days had beautiful skies, though the heat was a little oppressive at times. The first day of the tour consisted of seeing the temples along the large loop road (green road shown above). The second day we arose early to see the sunrise at Angkor Wat (the largest religious temple in the world) and then continued along the small loop road (red road shown above) to see a few more ruins sites. The complex dates back 1200 years and more temples are still being discovered.

For more info on the Angkor ruins check out Wikipedia or the UNESCO site. It’s an amazing place and I feel fortunate to have seen and walked in such a fascinating historical site. The pictures below don’t do it justice but I hope you enjoy them. Click on any of the images to view all of them in a slideshow format. 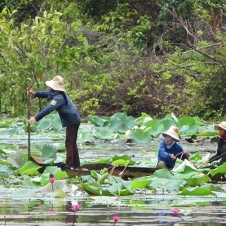 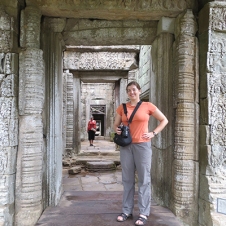 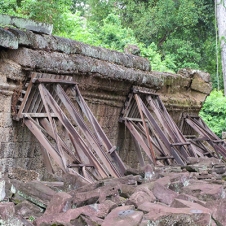 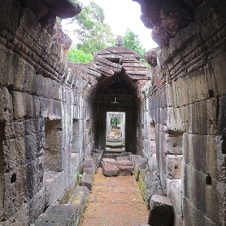 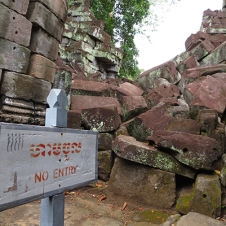 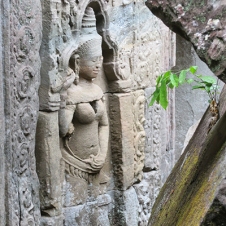 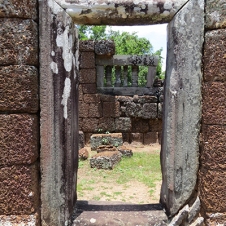 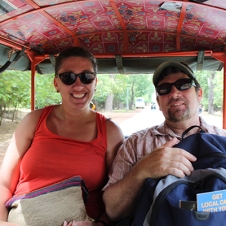 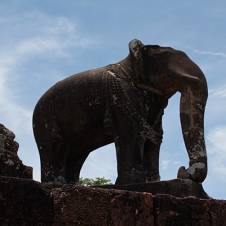 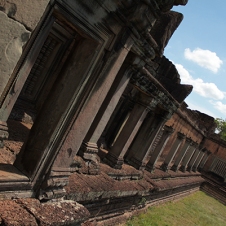 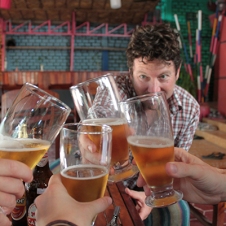 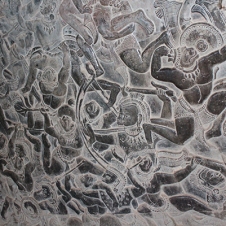 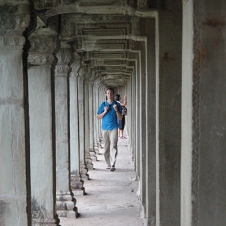 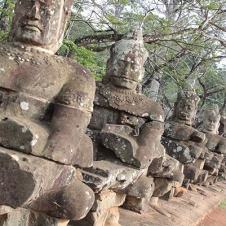 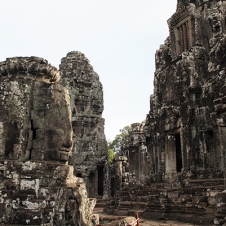 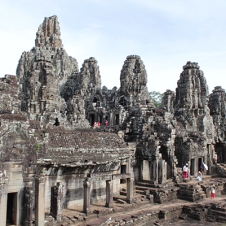 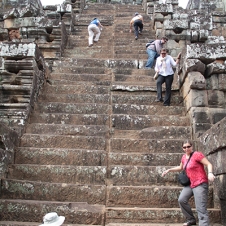 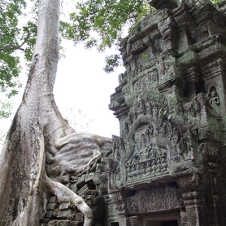 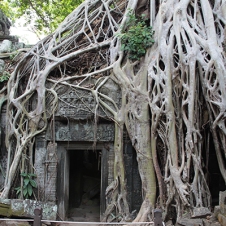 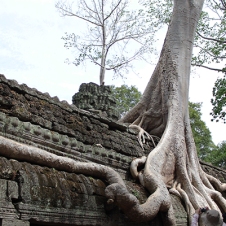