Panoramic shot of Lake Atitlan from the docks in Jaibalito

This past weekend (August 17-19) we visited a few cities just east of Xela (where we’re studying Spanish) that all reside on the banks of Lake Atitlan. Lake Atitlan is the deepest lake in Central America and is actually the caldera left from a volcanic eruption 84,000 years ago. In addition to being a giant caldera–filled with water of course–the lake is abutted by 3 volcanoes. For more info about the lake check out the link provided above or just Google Lake Atitlan.

Our journey began by leaving school a little early on Friday to catch the bus that leaves Xela and goes directly to Panajachel, the largest city on the lake. The options were to take a shuttle directly to Panajachel for $25 (that’s U.S. dollars) or a chicken bus for 20 Quetzales (~$2.50 U.S.). We opted for the less expensive and more adventurous chicken bus. For the low low price of only $2.50 you get to ride with locals, haggle for price with the bus attendant, sit in seats designed to fit children (most chicken buses are old yellow school buses from the U.S.), and a terrifying ride around sharp curves at high speeds. Excellent value if you ask me. 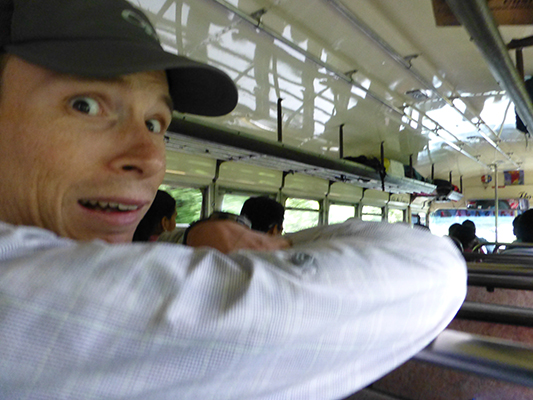 Dave holding on tightly on our way to Panajachel.

We arrived in Panajachel (Pana as it’s known locally) earlier than expected and before our couchsurfing host could meet us, so we wondered around town a bit trying to get our bearings. We eventually met up with Helga (couchsurfing host) and her three kids, ranging in age from 8-13 years old, I think. She and the kids were busy that night so Sarah and I set off exploring Pana.

Due to rain that set in that evening there wasn’t much going on in town. After much deliberation and being propositioned to come in and eat by many of the restaurants we passed, we settled on a place that served burgers and Asian cuisine. The choice was primarily based on finding the cheapest food. We planned to try local cuisine the next day. Not to mention, I just wanted a burger.

Wimpy looking burger but a burger nonetheless, with yummy fries too.

Saturday had a lot more in store. First thing in the morning we headed to the local market to grab food for the weekend and day. Our Spanish is good enough to buy food. That’s a good start. We bought 2 avocados, 1 onion, 6 bananas, 1 red bell pepper, 14 eggs and 1 box of pancake batter (panqueques in Spanish) for about $4.50. Not bad I guess.

The local market right around the corner from where we stayed.

After breakfast we took a boat–the main, and only mode of transport in some cases, to and from the towns on the lake–from Pana to Santa Cruz, about a 10 minute ride away. The boat ride cost 10 Q ($1.25). We’ve found that the best way to make sure you don’t overpay for anything is to figure out what the going price is ahead of time and then supply exact change when it’s time to pay, and be firm when necessary. Those tactics paid off all weekend, for both the bus and boat rides. It’s pretty gratifying to know you’re getting the best price possible. That said, it’s common for visitors to spend more than locals. There are typically two sets of prices for anything: local prices and visitor/traveler prices.

Sarah enjoying the mini cruise on the lake on our way to Santa Cruz.

Once we arrived in Santa Cruz we found the walking trail between there and the next town to the east, Jaibalito. The walk was only about a mile or so but packed with great views and some fun terrain. It was the first bit of hiking we were able to do on the trip thus far.

We observed a local fisherman pulling in a few small catches using only a line, hook, bait, and his mouth to reel in the line.

The town of Santa Cruz overlooking the lake. 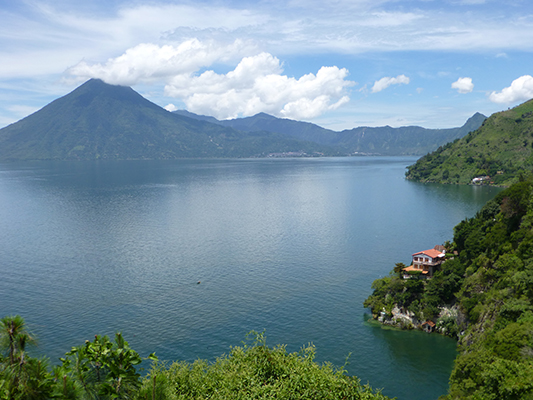 An amazing hotel we didn’t stay at but that was recommended by several people. Not in the budget. 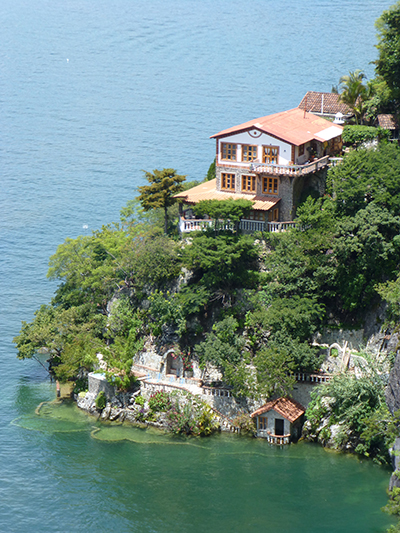 A closer shot of the aforementioned hotel (La Casa Del Mundo, I think). Also has a section in the lake.

Some of the folks we encountered on the hike. Their loads were a lot heavier than ours. Along the way we heard one of the local Mayan languages spoken. Pretty sweet to hear the language of an ancient people.

Example of some of the pretty vegetation we encountered along the way. 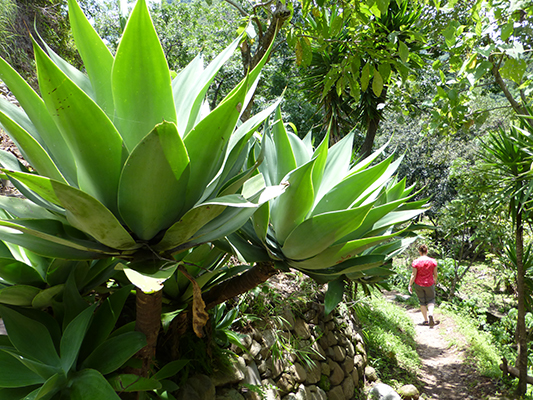 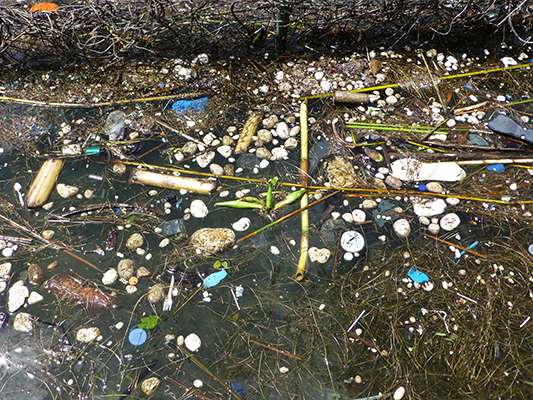 Unfortunately there was lots of trash along the lake shore. We were told by people from Guatemala that the lake is relatively polluted. Also in image are floating rocks. Volcanic rocks I think.

This is the inside of Hotel Isla Verde we visited on the trail. Pretty cool place. Evidently they were holding a seminar called “Consciousness and Sacred Sexuality Guatemala”. The session was called “Sex Magic-Manifesting your Deepest Desires”. Interesting. 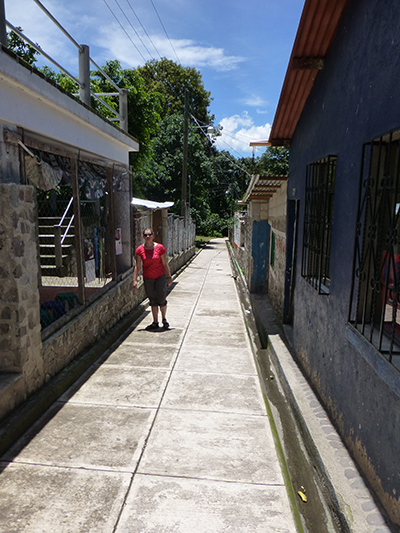 After making it to Jaibalito we walked the same trail back to Santa Cruz to explore for a while before heading back to Panajachel. At the Santa Cruz boat dock, where the walking trail ended, we were bombarded by tuk-tuk operators asking if we wanted a ride to the top. We assumed the walk to Santa Cruz was a short distance away and decided that tuk-tuks were for lazy tourists. No way we’d consider ourselves part of that group. It turned out that Santa Cruz was much further away and higher in elevation than we thought, and the path there was steep the entire way. Even with the terrain and distance we decided to continue the journey on foot and raised our noses at the tuk-tuks.

Once we reached what we assumed was the top, we took in the view and shortly after began our descent. There wasn’t much to the town of Santa Cruz. It was more of a community/large neighborhood than a place for tourists to hang out and sip on a cup of joe. If there was a place that could be considered a tourist friendly area we didn’t find it. Tourist definitely visit the town though. One sure sign is that more than a few of the kids asked for one Quetzal to have their photo taken. Still a cool place to visit, even for a short time.

Switchback number 1. Sure we don’t want to take the tuk-tuk? 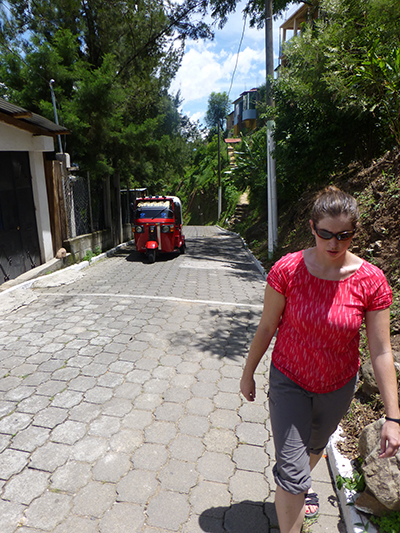 It can be much further, right? Maybe we should take the tuk-tuk. Nah.

Turns out it’s hard to find shade midday when you’re close to the equator. We found ourselves looking for someplace on the north side of a building in order to get out of the sun, like we were still in New England. Turns out the sun is pretty much smack dab in the middle of the sky. Hence reapplying sunscreen.

It’s amazing the terrain buildings are built on. All of Santa Cruz was like this.

View from the top-ish of Santa Cruz.

This guy had the right idea. Find a shaded hole on a patch of cool dirt and take a nap.

After descending back down to the boat docks we took a boat back to Panajachel. We both promptly took warm showers, which neither of us had had for a couple of weeks at that point–“warm” being the key word here. Afterwards we took a short walk around town with Helga, seeing a couple of places we hadn’t yet found.

One of the rivers leading into Lake Atitlan. We walked along it with Helga and her dog. 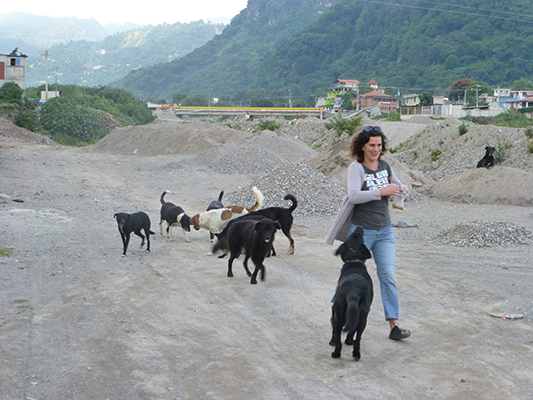 Our couchsurfing host Helga, her dog, and a bunch of the local strays. The strays aren’t so scary if you have dog treats. They all loved Helga.

And of course a local frozen treat. Seeing a theme yet. Strawberry frozen ice cream covered in chocolate.

For dinner we finally had a chance to hang out with Helga’s kids. They introduced us to some local street food. We had Tostadas (deep fried corn tortillas covered in a thin coating of avocado, black bean sauce and salsa, and then chopped onions and cheese on top) and Atol (a creamy warm drink made from corn tasting a lot like canned creamed corn, but better). They were both delicious. Afterwards the two of us went to a bar to grab a drink but were beat and headed back soon after I (Dave) finished my beer.

The next morning we made pancakes and scrambled eggs for Helga and her family. The kids tried banana pancakes for the first time so we agreed to try pancakes covered in black bean sauce. It was surprisingly good, and according to Helga, good for you. We spent a couple of hours after breakfast having a great and varying conversation with Helga.

All in all it was a great weekend. The bus ride home was equally scary and thrilling as the one to Pana, this time with twice as many people on board. Still no chickens on the chicken bus though.