In a previous post we described the stove project that we had an opportunity to work on while attending school at Pop Wuj Spanish Language school. The stove project is just one of the ways that Pop Wuj helps the local communities near Xela. The project is done in three phases: Phase 1 includes laying down the cement base; Phase 2 includes laying down three layers of bricks using clay cement and regular cement; and Phase 3 includes installing the inner ramp (to direct smoke to the chimney), the metal stove top, and chimney pipe. In the previous post we described phases 2 and 3 because those were the steps we had been involved in up until that point. We weren’t sure at the time whether we would have an opportunity to participate in phase three, hence the addendum.

Phase 3 is a relatively fast step when compared to steps 2 and 3, but is a very important step because it’s the foundation for the entire stove. So the first phase requires a bit more attention to detail to ensure the rest of the phases and the final product are the best they can be. We were lucky to have Carmenlina on hand again to ensure quality throughout the building process. In addition to bringing quality to the table she’s also a speedy worker. 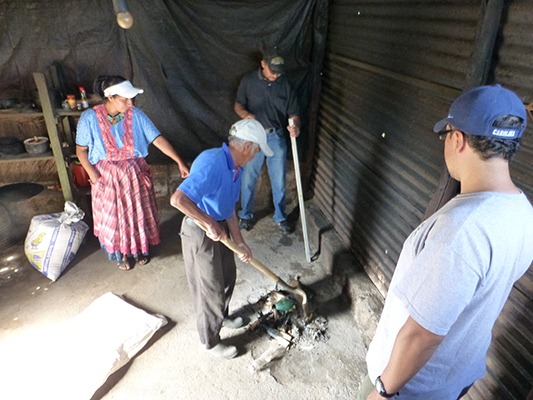 The stove recipient cleaning up the remains of a small fire that he previously used to cook with.

The first image (above) illustrates one of the effects of using an open fire with which to cook. All of the surfaces (walls, ceiling, pillars, light bulb, etc.) inside of the building are coated in a black residue from cooking with an open flame over a long period of time. I couldn’t help but think about the similar effect the open flames have on one’s lungs. Many of us back home enjoy a campfire from time to time and may experience this to some extent, but we definitely don’t spend several hours everyday over an open flame preparing meals. It’s easy to see the immediate benefits of these stoves. This is a known problem in certain parts of the world and there are many projects going on to help address the smoke inhalation issue. Here’s a link to a stove project a friend of ours worked on in India in collaboration with a group called Design Impact. 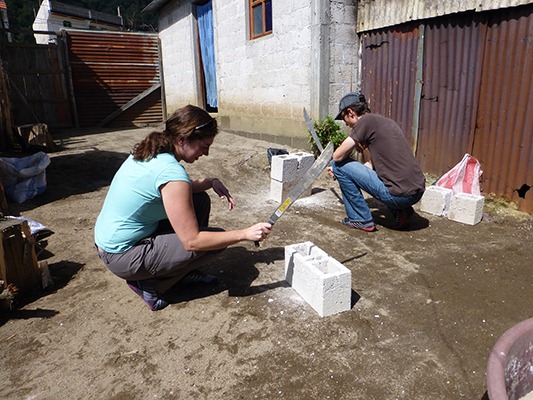 Sarah and Dave chopping cement blocks with machetes. It’s amazing what you can do with a machete. 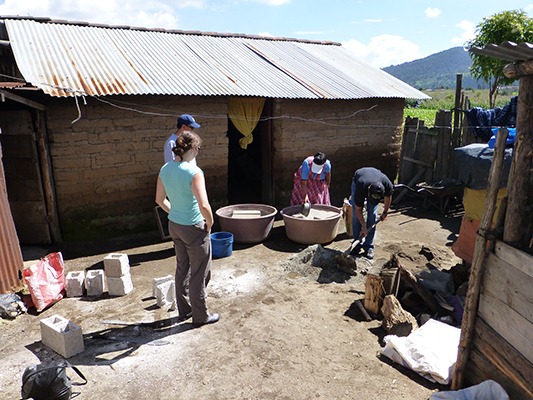 The working crew that day included Sarah, Fredy, Carmelina, Carlos and Dave (behind the camera). 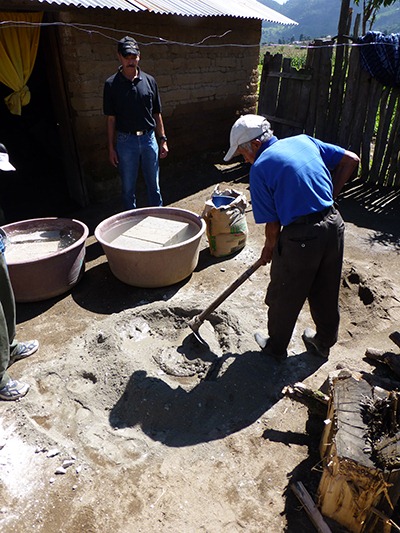 This man lived at the home where the stove was installed. He was a construction worker in the past and was a master at mixing cement. He waited patiently as we unskilled laborers attempted the mixing process but took over to make sure it was done properly. 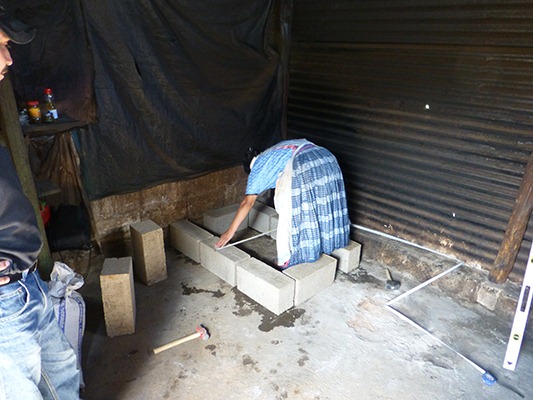 Carmenlina laying out the base. 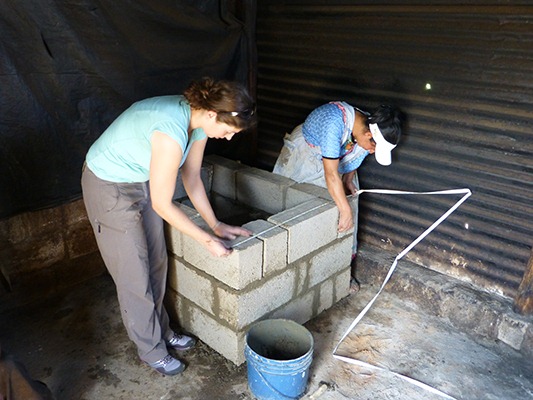 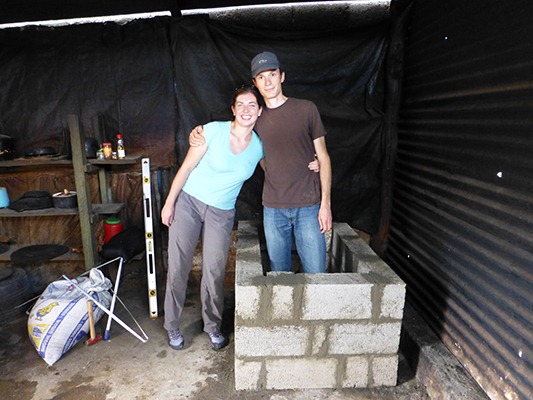 Sarah and Dave posing with the finished product. 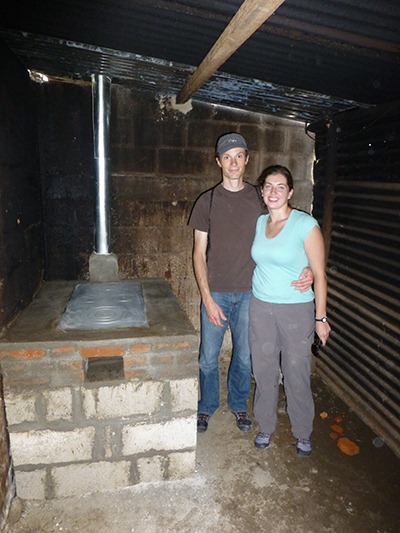 We visited the stove we finished last week. Still look awesome. It needs many more weeks to dry before it can be used though. 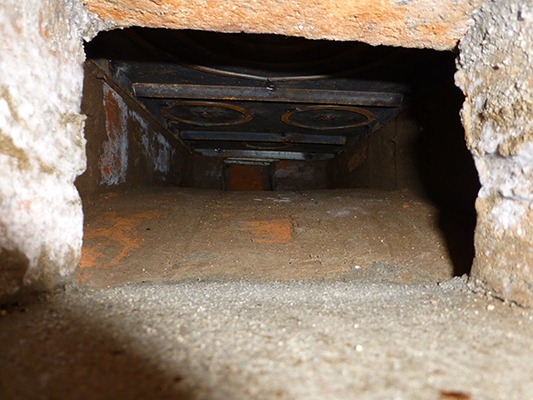 A view inside the stove. You can see the ramp leading to the exhaust hole in the rear of the stove.

On a separate but related topic, this stove project reminded me of a project I’d heard about some time ago taking place in the Philippines. According to a video about the project, many of the buildings there are similar to some we saw here in Guatemala in that they are dark inside during the daytime and aren’t connected to an electrical source to power a light bulb. The project is called “Liter of Light“. It helps solve the problem of low light or no light situations in buildings by installing a 2 Liter soda bottle filled with clean clear water and a little chlorine (to prevent growth of algae) in the roof/ceiling of the building. During the day when the sun is shining the 2 Liter bottle filled with water transmits the light from the sun through the water into the room where it is installed. According to the folks that came up with this idea it can put off the same amount of light as a 50-60 watt light bulb. This of course depends on the strength of the sun outside. Nonetheless it’s a very cheap solution when compared to the electricity and bulb needed otherwise. 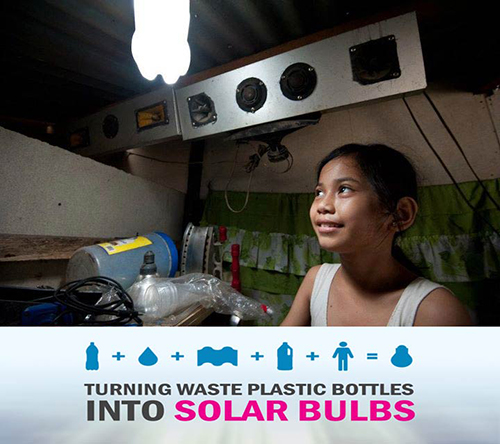 We shared this idea with the folks at Pop Wuj and they expressed great interest in incorporating this project into their already large scope of projects. They’d like to potentially install a water bottle light fixture in the same homes that receive the stove. It’d be really cool to see that take place. If you are someone who’s involved in communities that might benefit from this and you happen to be reading this blog post, check out the Liter of Light website.

Thanks Pop Wuj for allowing us to participate in such a cool project.