We have finished our 3 weeks of Spanish language lessons and boy was that difficult! We have both learned a lot but are not even close to being able to speak fluently. We should be able to improve upon our foundation with the next 3 or so months of travel in South America.

I just want to recap and summarize our time in Quetzaltenango (Xela) for the past 3 weeks.

The city of Xela sits at an amazing 2,330 M which is 7,640 ft high. That’s taller than any of the mountains we’ve hiked in the White Mountains in New Hampshire. After three weeks of living here we are still not used to it. It’s hard to breath and we’re always tired. We hoped we’d get somewhat acclimated because we’re heading to Quito Ecuador next, which is at 9,350 ft. Maybe we have improved but it’s just been slow enough that we haven’t noticed.

Xela is also home to a lot of “Chicken buses” which consist of old school buses that are considered no longer fit for use in the United States. My theory is that they are considered that way because the emissions are no longer functioning. The exhaust that comes out of the back of these things is dense black smoke and makes the air impossible to breath. This could also be adding to our difficulty breathing and always feeling tired.

Panoramic picture of Xela and Dave

But, those are the only two downsides to Xela. Everything else we’ve experienced has been great. Some of the great things…

Chocolate Puro – The best hot chocolate I’ve ever had. I’m not sure hot chocolate would even be a good way to describe this. Chocolate puro is a piece of Xela Chocolate melted down into liquid form with some hot water (or milk if you so desire). It’s very smooth and creamy. The best Chocolate Puro I had was at Cafe Nim Sut. 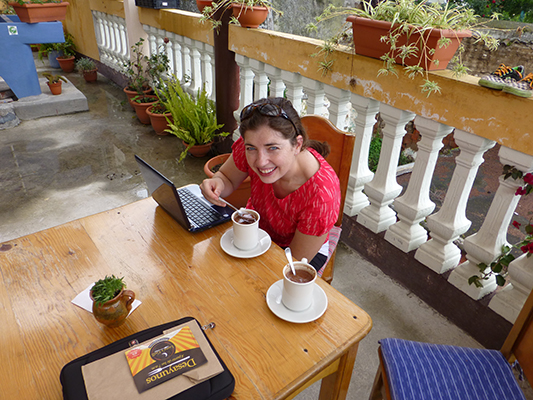 Cafe Nim Sut is also a favorite of ours. They have an amazing view of the city, the best chocolate puro and Wifi.

Xelapan is the local bakery chain in Xela. They have the special bread of Xela called Sheca. Sheca is bread with anise inside. We tried it and it was ok. We really one variety of bread sold there made with tasty spices and a chocolate coating on it; AND it only costs $0.25. They are pretty big, one is enough to share if we’re not too hungry. Xelapan was our go to place for a quick, cheap snack during the break. 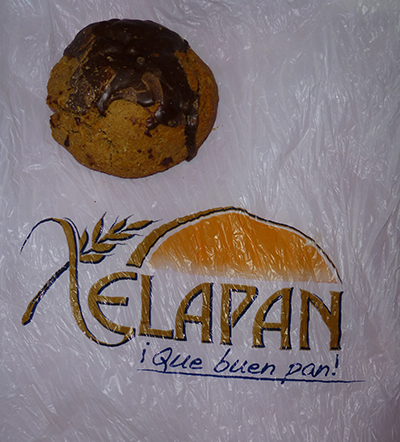 The Bake Shop is the other local bakery that we’ve come to love. This bakery serves more sweets than bread. They are only open two days a week and are a little bit more expensive. They are also owned by a group of Mennonites–you can kind of see them in the picture. We came to love the donut type pastries that were filled with either fruit or peanut butter, both of these are $1 each, so comparably it’s 4 times more expensive. We also got a loaf of banana bread from them. Don’t worry Mom, yours is still the best.

The cemeteries they have in Guatemala are very different from what we have back home. Families pay for a plot and then decorate it however they want. Some of them are very intricate. There was also a section where people could rent a spot if they couldn’t afford to buy a location outright. The problem with the rented spots is that if you stop paying you get evicted. 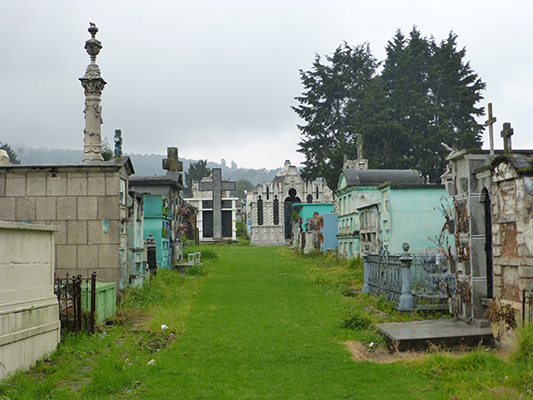 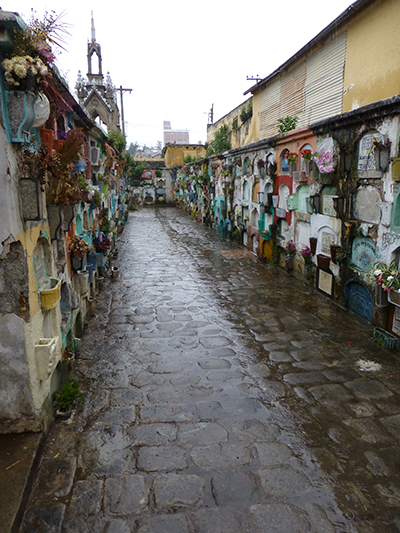 You could get evicted from these…

Xela has a market every day of the week. The farmers that grow veggies and fruit from the surrounding land outside of Xela travel every day with their goods and sell them. We were big fans of the bananas. 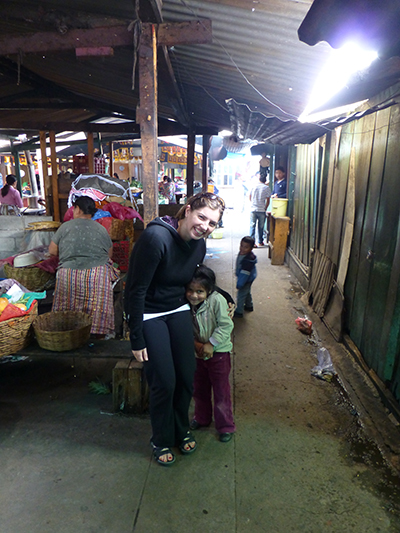 This little girl wanted her picture taken. We couldn’t say no.

Xela is surrounded by some good size hills and mountains, a couple of which we hiked. The first was to a church that overlooks the city with an awesome view. And the second was to Cerro El Baul Mountain. Which was described as a daily 30 minute hike for Guatemalans. But it ended up being an 1.5 hour up because it’s 8,695 ft high. It’s was beautiful up there and there was 100ft long concrete slides. Dave and I both tried them, but I feared my pants would melt so I didn’t get the full experience.

The first hike. The panoramic in the beginning is from this hike.

And of course the people we met…

Marina – She was our house mother for the past three weeks. She was very hospitable and is an amazing cook. 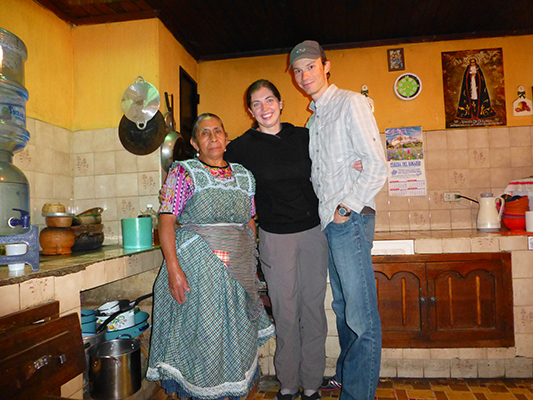 Fredy – He was Dave’s Spanish teacher for the three weeks we were here. Dave has learned a lot from him and has been able to hold some interesting conversations, both in English and Spanish.

Patty – She was my first teacher and was very patient throughout my first two weeks of struggling through Spanish. I learned a lot in those two weeks.

Carlos – He was my second teacher, they suggest you switch after two weeks. So I said I was flexible and they ended up switching me. He was also a very good teacher and he was able to explain to me many tenses in one week.

Nicki – She started the same time we did and has been able to hang with us the most. She’s going to be an expert at Spanish since she’ll be at Pop Wuj for 7 months! Here’s a link to her blog if you’re interested. Naraneta Crossing.

And of course all of the other students we hung out with and/or worked on projects with during our time in Xela.

One of the delicious breakfasts that Marina made for us.

Monument at the top of Mt. Baul

The skills these Guatemalan women have.

Dave and I with the Super Chivos Mascot

Some Guatemalan ladies with their babies walking around in Indigenous clothing.

Some of the locals fixing the stone roads.

Dave resting before our first hike.

The church next to Central Park

This little girl wanted her picture taken. We couldn’t say no.

Another view of the church and central park

The monument in central park.

You could get evicted from these…

Our bedroom in Xela for 3 weeks.