If you’ve ever seen a documentary about India on, say, The Discovery Channel, then you’ve probably seen images of the city of Varanasi. Images of stairs packed with people bathing in the Ganges river and narrow labyrinth like streets congested with cows, people and motorcycles might ring a bell. It’s seen as one of the holiest places in the Hindu religion and is one of the world’s oldest continuously inhabited cities, since around 1200 B.C. It was described to me to be as important to Hindus as Mecca is to Muslims. If as a Hindu you die in Varanasi then the cycle of reincarnation—a component of the religion—comes to an end. Varanasi was the third stop on our travels through India.

View of the Ganges river bank from our hotel.

Morning bathers outside of our hotel. 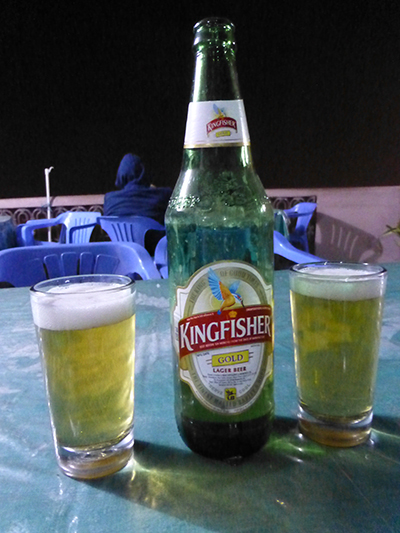 Celebrating our first night in Varanasi. 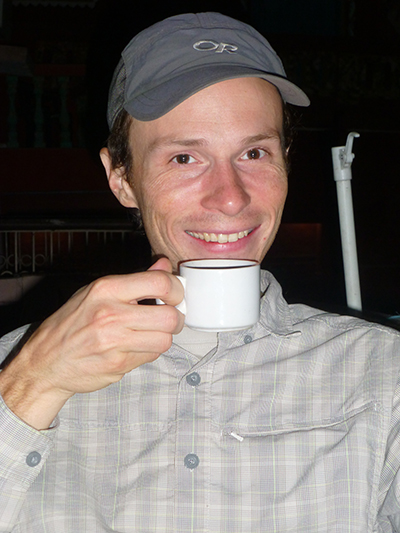 Legit masala chai, as opposed to just tea with milk.

It turns out the masala chai was made in a machine. Still some of the best we’ve had. 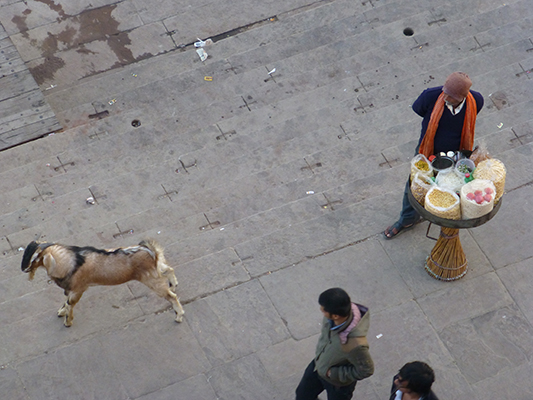 There were cricket games being played all along the river bank.

Goats indulging in one of the many trash piles.

Our hotel (Alka Hotel). It was in a great location on the bank of the Ganges river. The price was decent too at Rs 500 ($9) per night.

Being a somewhat difficult place to navigate, specifically in the old section of the city, and the fact that we didn’t plan to visit for more than a couple of days, we decided to try out a guided tour. While researching hotels online I read quite a few reviews from travelers raving about the city tours. We don’t usually do tours because they can be a little pricey and most of the time we have no trouble exploring a place on our own. But due to the good reviews and our planned short visit we decided to give it a try. The tour we chose included seeing some of the sights outside of the old city, a walking tour of the old city and a boat ride on the Ganges. The tour was split over two days. 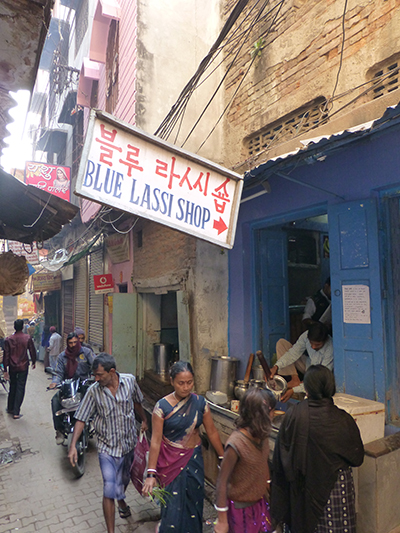 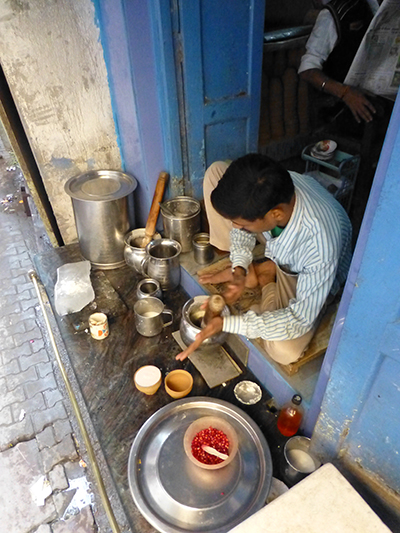 Lass in the making.

One of the many narrow paths in the old city shared by people, cows and motorbikes. 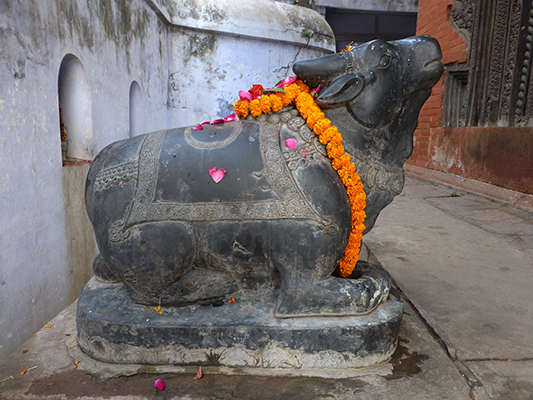 Wood carving with some naughty Kama Sutra action at the bottom. 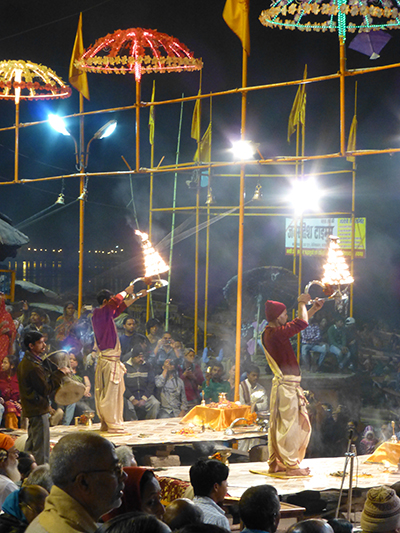 Nightly ceremony on the river bank.

Nightly ceremony on the river bank. 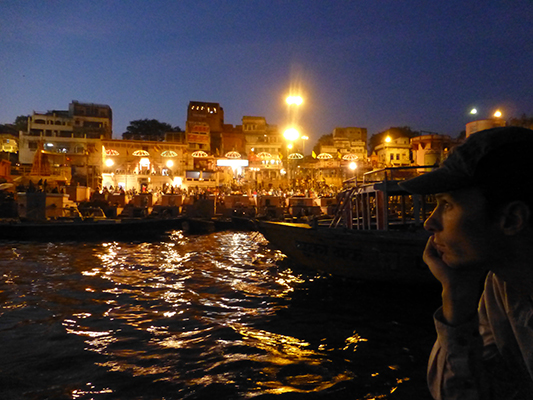 Nightly ceremony on the river bank. We observed the first half from a boat. 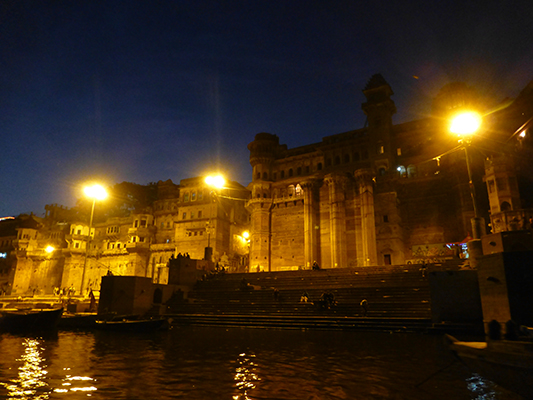 One of the Ghats we saw during our evening boat ride.

A leisurely trip down the river and Sarah’s stretched face. 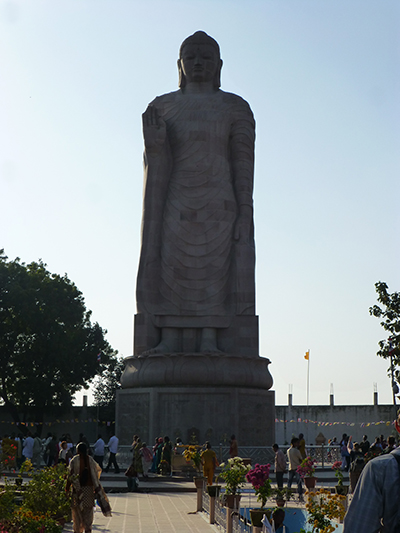 This tower marks the spot where Buddha supposedly delivered the First Sermon of Sakyamuni. 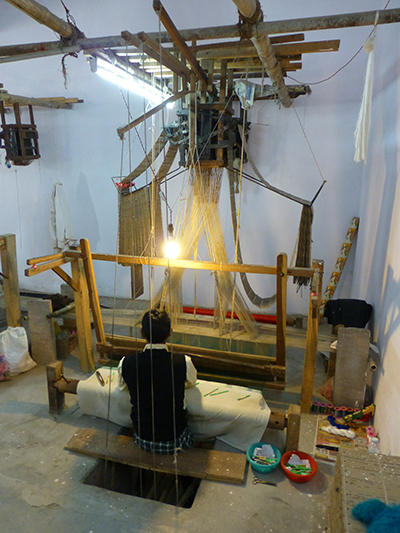 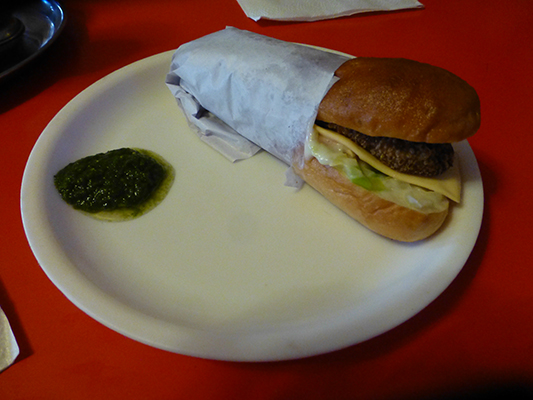 The guide and I at the other Burger King. They served a variety of India dishes but no hamburgers. 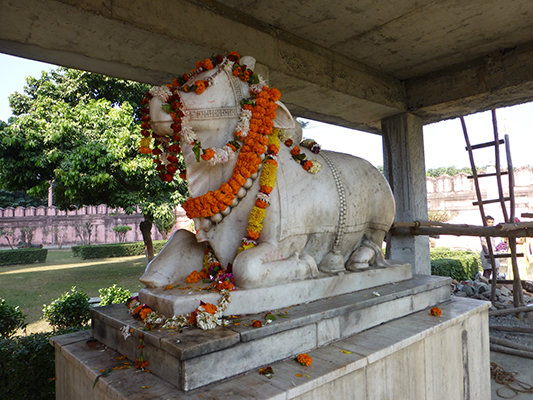 I love how they decorate the cows at some of the Hindu temples.

Another shot of one of the lively streets in the old section of the city.

While the tour afforded us the ability to see a lot of places in a short amount of time, we walked away in the end feeling a little disappointed. The first half of the tour was great. Our guide was excited to show us around and seemed pretty knowledgeable about the sights. Then we noticed that his mood changed suddenly during lunch on the first day. After which his excitement waned along with his general involvement in the tour. For the rest of the tour we were simply being shuttled from sight to sight as he attempted to hurry us along and wouldn’t join us at some of the areas to provide guidance, as we witnessed other guides doing.

We think his drastic shift in behavior came about during lunch on the first day when he realized that we weren’t the big spenders he had hoped for and I‘m assuming usually gets on these kinds of tours. He realized this when for lunch he gave us the choice between a “good and expensive” restaurant or a “good and cheap” restaurant and we chose the cheap option. And after seeing the menu at the “cheap” restaurant we explained to him that our idea of cheap was actually about half the price of what this restaurant had to offer. To which he responded, “oh, you’re backpackers”. That’s the point at which we think he realized that we wouldn’t be buying anything from the shops he had planned for us to visit and made the assumption that his tip in the end wouldn’t be as hefty as he’d hoped for. What he didn’t realize was that this tour for us was an excursion from our normal practice as well as our budget. The price of the tour was high enough, so any extras like an expensive lunch or silk fabric from a local factory were out of the question. That aside, we saw a lot of the city and likely more than we would have otherwise.

In addition to the guided tour, we did some sightseeing on our own. One of the most interesting stops being the burning ghat. This is where bodies of deceased Hindus are cremated in the open on the bank of the Ganges river (not sure if non-Hindus can be cremated there as well). This is definitely a sight I never imagined seeing and when I think back on it am still surprised at how tolerant family members are of tourists and others that come simply to watch the ceremonies. While observing you feel like you’re intruding on a very private moment. Though, our experience thus far in India has shown us that there’s a lot done “in public” that we aren’t likely to see back home. I’m not sure if this is purely a cultural characteristic or a reality because of the dense population and the need to share space and resources the come with it, including a crematorium. (You’re not allowed to take pictures of the burning Ghat.)

This area is right behind the burning Ghat. This is only one of the places they store wood to be used in the cremations.

This is where the way the wood to be used in the cremations.

Walking around the old city and along the Ganges river bank was in my opinion the richest part of our visit. There is so much energy packed into such a small area. There are temples, shops, people, cows, goats, water buffalo, boats, kites, cricket matches, ceremonies and more people and cows and ceremonies happening all around. All of these things in addition to the extra attention you receive as a tourist in a place like Varanasi can be an in-your-face experience nearly every moment you’re away from the confines of your hotel. 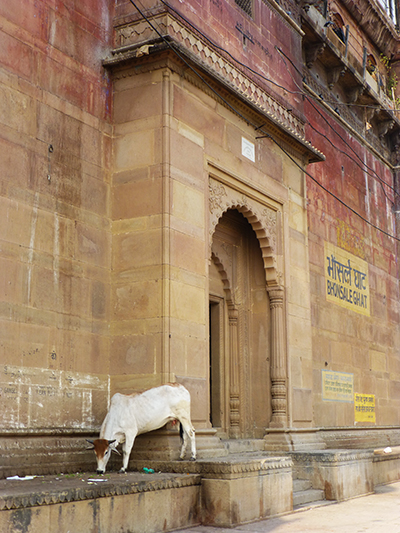 One of the many Ghats and cows.

Another of the many Ghats along the river. This one looks pretty old. 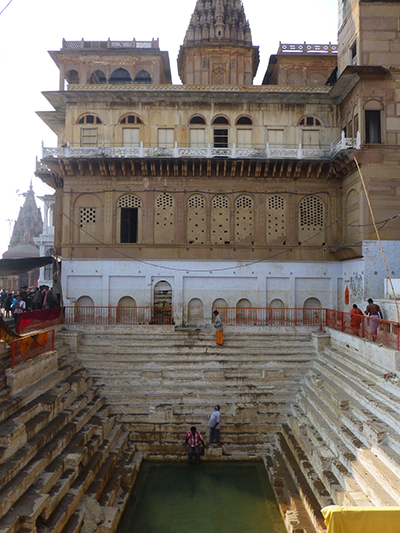 People bathed in here as part of a Hindu ritual (I think). Not an intelligent description I know, but nonetheless a cool photo. 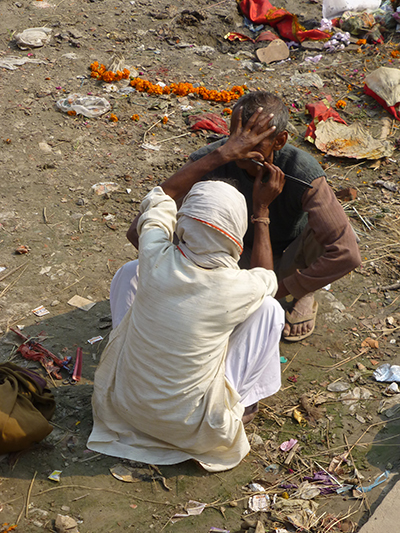 It’s hard to tell, but this is a barber shop. The guy in white is shaving the face of the other. 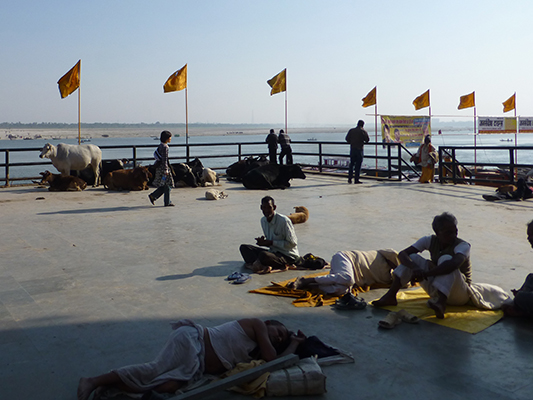 A popular resting place for both people and cows.

Drying cow dung. Not sure what it’s used for, maybe burned.

Sarah looking a little lost in the maze like streets.

One of my favorite Ghats.

We ended up spending an extra day in the city due to some difficulties buying train tickets to our next destination. As we get further into our trip we’re figuring out more and more about India’s confusing train system. There are many ways to buy tickets and many types of tickets you can buy. To improve our chances of getting from A to B we’ve learned that it’s best to come armed with as much info as possible (e.g. train numbers, stations, etc.) when buying tickets because the ticket offices aren’t always willing to help you figure much out. This was especially the case in Varanasi’s foreign tourist ticket office. Our experience at Kolkata’s foreign tourist ticket office went so well we assumed things would be the same at all tourist offices.

In the end we spent about three and a half hours trying to buy tickets before we were successful. Throughout most of our exchange with the ticket salesman the only assistance he could provide us was telling us repeatedly that a route we had researched and settled on was “NOT POSSIBLE!”. My ineffective response was to tell him that it was his job to figure out what was possible, especially since he has the computer system at his disposal and, well, that’s what he does all day. Sarah’s approach was less confrontational and way more effective in the end. She politely, yet persistently, asked him to check different routes that she had researched until we found one that worked. At the end of it the salesman made sure to tell us that if we miss a train because of delays that “well, it’s not my fault and I won’t be there to help you”. And how is that different than what you’re doing now?

As with the the two cities we’d visited prior, Varanasi was full of surprises and unexpected challenges. It’s hard to capture a place like Varanasi in words and images only. Watching a documentary about it doesn’t do it justice either. It’s a place that needs to be seen, smelled and heard to really and truly get the full experience. And with the short time that we were there—in all about three days—we only experienced a sliver of what it has to offer.