Tigers, nah, they’re only in zoos.

Kanha National park is one of the largest national parks in India and has over 200 Bengal tigers along with hundreds of other animal types. We decided to go here so we’d have the chance to see a tiger.

The park at dawn.

We had met an Italian couple on the bus ride to the village near the park entrance and had decided to share a jeep with them to reduce the cost. An older couple was staying at the same resort we were and decided to join us since you can take up to six people in one jeep. The manager of the hotel was very friendly and willing to help us fill out the appropriate paperwork to get a jeep and ticket into the park.

The Indian government restricts the number of jeeps going into the park to protect the land and animals that live there. I don’t disagree with this, I think it’s a great way to protect the park. But, there is an online system now where people can pre-book the jeeps and so all of them were sold out months ago. There is an emergency quota, similar to the train system, for people arriving the day before. But, the process to get this ticket was just baffling.

We had our paperwork filled out and completed for 2:30pm the day prior to going on the safari. The manager of the hotel said he somehow got us to the second position in the stack of paperwork of people trying to get in. This was good for us since they only give out 2 or 3 sometimes. All of these papers are then stapled together and additional ones can be added and stapled to the bottom of the pile. The office where the papers are kept and where the tickets are given is open from 2:30pm to 6pm and then re-opens at 6 am the following day. At 6 am they release the emergency tickets and whoever is first in the stack of papers gets the first ticket and so on until they run out. Simple right?

Wrong. The stack of papers remain outside the locked office all night and apparently people come in the middle of the night or early in the morning and remove papers so their group is towards the top. To avoid this, we were told you have to guard the stack of papers. HA! The manager of our hotel said that he will watch the stack and make sure we stay at our current place until midnight when he goes to bed. After that, he wanted us, the three couples, to check on the stack starting at 3 am (I guess people don’t come from midnight – 3am).  There were multiple times when we or the others in our group asked why they didn’t lock up the papers at 6pm when the office closed. We were told then people would come multiple days in advance and book the safaris and it just wouldn’t work and many other reason that we just couldn’t understand. We decided that, being foreigners, we couldn’t change the system and agreed to do the babysitting in shifts starting at a later time than suggested. The Italian couple was the first at 4:00 am, the older couple at 4:30 am, Dave at 5:00 am and Dave and I at 5:30 to 6 am when the office would open.

Well, the Italian couple got there at 4 am and our sheet was missing completely, so they added our second copy (which the manager knew we should have filled out in advance). The people who were there put our sheet at the bottom and the Italians tried to explain that we were on top, but couldn’t do it with the limited English they had. When the older couple showed up at 4:30 with our sheet on the bottom, they were very upset and adamant about getting back to the top. They did whatever they had to, which I think included yelling, to get our paper back on top. We were not there, but were told it got a little hostile. So when Dave arrived they decided to all stay together as a group until the office opened at 6 am. The babysitting worked and we got a ticket into the park. Woo.

At 6:30 am we were off into tiger country. The sun was just rising and it was chilly in our open topped jeep, but there were many animals waking up and roaming the park. The goal of the safari is always to see a tiger, both the guide and driver know that, so many of the animals we saw were in passing for our tiger search. We saw many different varieties of deer, water buffalo, many birds, peacocks, and jackals. It was amazing how beautiful the park was with all of the wildlife, forests, and meadows.

All of the jeeps lined up to get into the park and see the tigers first. 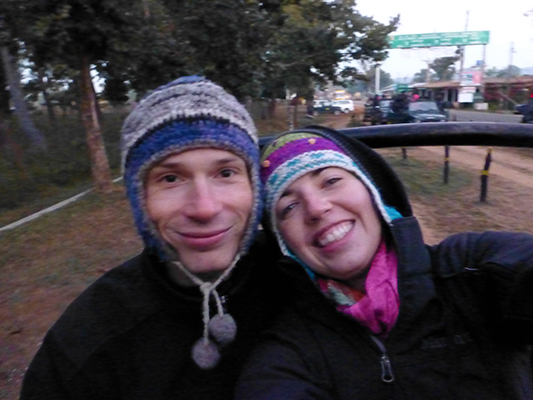 All dressed up for the chilly morning and ready for the tigers!

The park is beautiful in the morning.

But, of course, it’s mostly about the tigers. The jeep driver and guides know where the tiger territories are and stop at various spots. They also communicate with the other jeep drivers and guides to see if they’ve seen one and where it was. We had driven up behind a jeep that said they saw a tiger cross the road a couple of minutes before. Bummer, we just missed it. The jeeps usually hang out for 10 or so minutes in the same area with the engines off just in case the tiger decides to come back out. So we sat for a while all just hoping we’d get to see one. While waiting we hear this really loud yip noise all of a sudden and some rustling in the woods right next to the jeep. The rustling noise started to move away from the jeep and sounded like there was something running through the under brush. No one knew what it actually was but the jeep driver started the jeep and sped forward to stay with it. All of a sudden a baby deer jumps into the road in front of the jeep. Bummer! It was a just a deer.

All of us were high on adrenaline and we couldn’t keep the giant smiles off our faces when other jeeps came and asked if we saw a tiger or not. The whole debacle with the babysitting of our paper was well worth our tiger siting. Unfortunately, with all the excitement of the tiger siting we didn’t get our camera open and functioning to get a picture. But, the older couple has some awesome shots they are going to share with us (thank you so much!). We’re currently waiting for them and will update once we have them.

It was a perfect Christmas present, since we couldn’t be home with family. 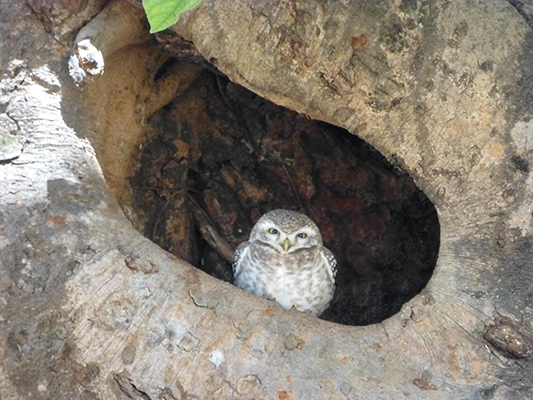 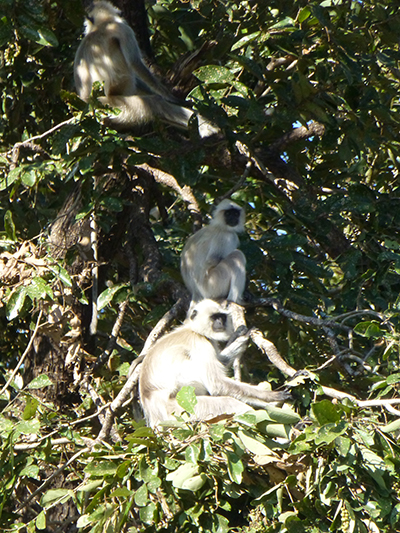 Kingfisher (the bird the Indian beer is named after) 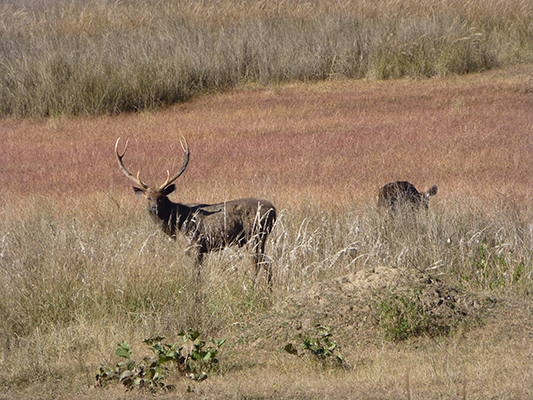 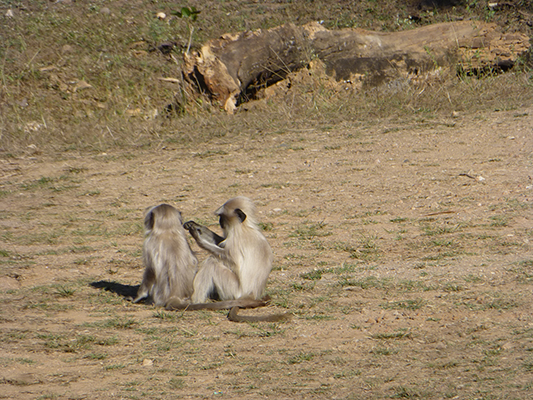 Waiting for an opportunity to steal our food. 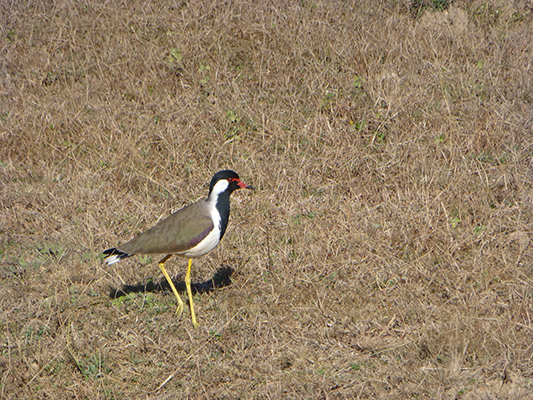 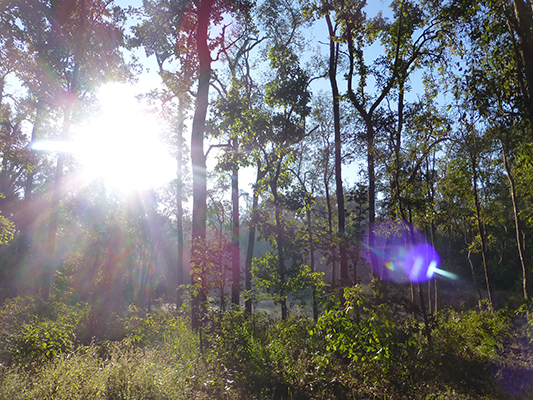 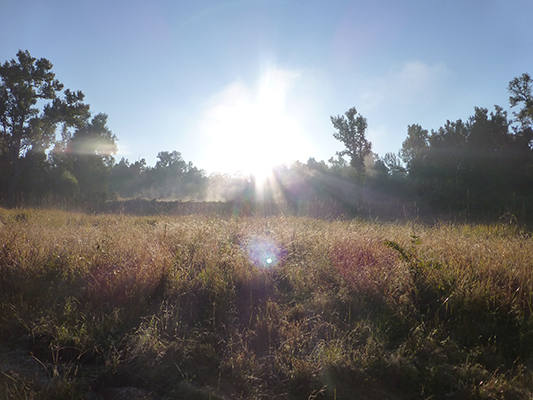 One spot where a female tiger and her cubs frequent.

Dave and a water buffalo 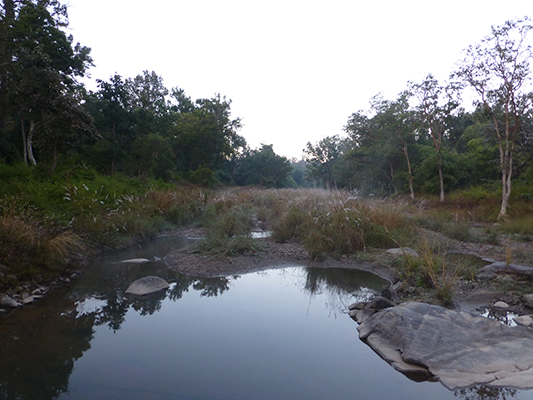 River in the park. 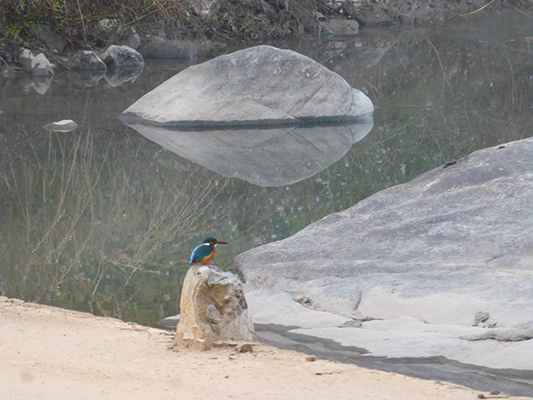 2 thoughts on “Tigers, nah, they’re only in zoos.”