Camel Safari and Living in an Old Fort

Posted on February 24, 2013 by peachandbones

We had done some research ahead of time and decided that it’s going to be cheaper to do a camel safari from a small village outside of Jaisalmer called Khuri, so we decided to head there first. Jaisalmer and Khuri are the farthest west most tourist will go in India. It’s very close to the Pakistan border. Because it is so far west, you have to back track when heading anywhere else in India. So we decided to book it out west and we’ll see the things we passed on the way back. Because of this decision, we had a very long travel time.

It started with a bus from Udaipur to Jodhpur. This bus was suppose to leave around 2pm and ended up leaving around 3pm. This is completely normal, we were just concerned because we had train tickets from Jodhpur to Jaisalmer that we didn’t want to miss. The bus was in rough shape. We had fought with the guy to not get the back of the bus, but of course we ended up there. So the whole ride was bumpy and the seats were broken in the partially reclined state. Our poor necks got so sore holding our heads out for 5 hours. Anyway, the ride was long and uncomfortable to Jodhpur. We arrived pretty late there, got on a rickshaw and headed to the train station where we boarded an overnight train to Jaisalmer. We arrived 6 hours later at 5:30 am. We decided to wait inside the train station until it was day light for safety reasons. So, we left the station on foot for the bus stand to Khuri around 7 am. We never found the bus stand, but we did meet plenty of people who told us where to stand for the bus to Khuri and we got a rough estimate that the bus will arrive around 9 am. Nine came and went and someone told us it was actually 9:30 am. Well, 9:30 came and went and someone told us it was coming in 5 minutes at 9:40. The bus actually came around 10:30. We stood in the middle of no where for about 3 hours. It was great to watch all of the cars, rickshaws, cows, and people go by… 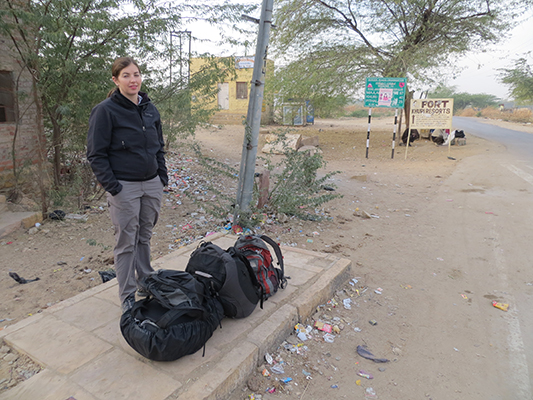 Waiting for our bus.

One of the many interesting things to pass us.

We also met a guy at the bus stop who owned a hotel in Khuri who set up camel safaris. He told us the price was the cheapest there and convinced us to get picked up by his brother and check the place out. No promises of staying there if we didn’t like it. We arrived an hour later in Khuri and were welcomed with his brother. It was a quick 5 minute walk and after looking at his place and other places we decided to stick with his place and do the camel safari that night so we wouldn’t have to sleep on the far from perfect mattresses they had there. So, after a long 24+ hour of travel we got on the back of a camel.

Kids playing in the little village of Khuri.

Camels are much larger than I thought. They are much taller than horses, for some reason this never came to mind when I wanted to get on the back of one. The height wasn’t that bad, it was the getting on and off that was a little creepy. The camels have to kneel and then lay on their legs in order for their passengers to board. They can only go up and down one side at a time, the back legs are first up and then the front. So you’re at a steep angle for the duration of the camel going up and down. Some camels are faster than others and sometimes the camel your on is tired and slower.

Camels waiting to be mounted.

Anyway, we bumped along the back of the camel for a good 2-3 hours into the desert. Some people had the camel drivers on the back with them and others didn’t. Dave and I both had drivers with us. At one point, my driver left me alone with my camel to drive myself. Thankfully my camel was the nicest, best behaved, and thoroughly trained camel there and I had no problems. We have a funny video of me being stuck on my camel. The only thing I wasn’t taught was how to do the up and down commands to get on and off. So when we arrived at camp, everyone else is off their camel and I’m just sitting there waiting for one of the drivers to help me. We actually put this one on Youtube so you’ll all be able to laugh at me as Dave did. Click here.

Dave on his camel

Some of the local women carrying water back to their homes.

Camel drivers ride in the back. Apparently camels can carry 3 people no problem as long as they are healthy. 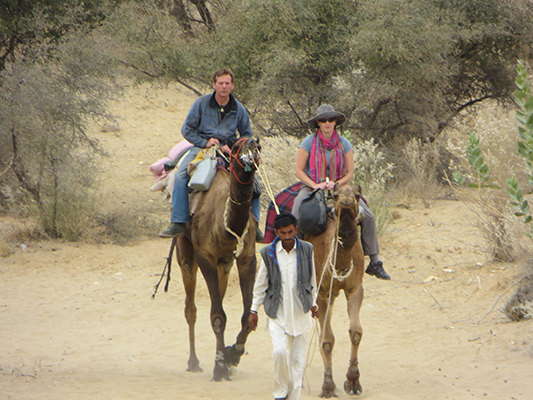 This camel driver owned both of these camels. 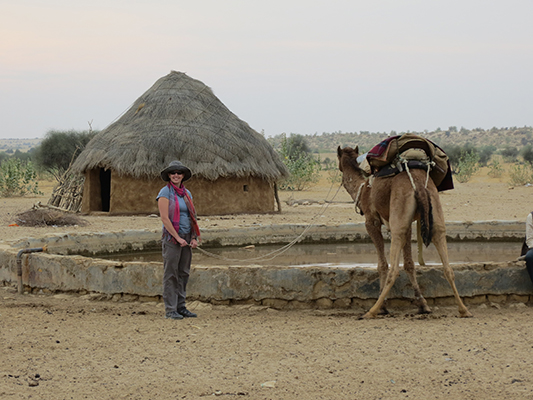 He was peeing, that is why I was standing so far away.

They sure are goofy looking. The camels only, I mean…

At camp, the drivers made two separate fires, one for the tourists and one for them to do most of the cooking on. We got to relax and watch the sunset while the drivers prepared dinner. Some of the people on the safari with us had paid extra for chicken. The chicken was thoroughly cooked over our fire with bonus seasoning of sand and coals, I’m glad Dave and I didn’t pay extra for that. The food was good considering we were in the middle of a desert-we had chapati, rice, vegetable curry and a lentil curry. Very tasty. We had some good conversation with the other tourists on the safari over the camp fire. We talked for many hours then we decided to hit the sand. Literally. We slept on a blanket on the sand with another blanket over us. It was a good experience. We were mostly freaked out that the camels would walked over us during the night since they were free to roam and did so very close to our fires and beds prior to us being in them. 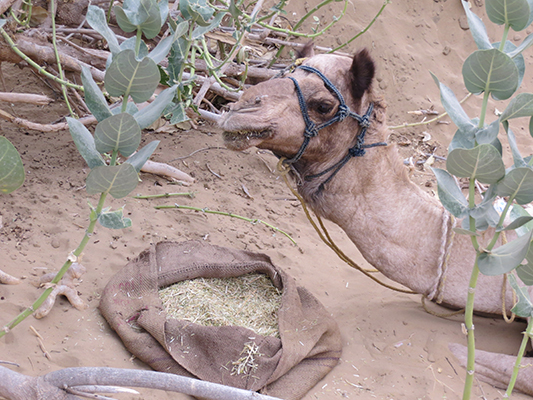 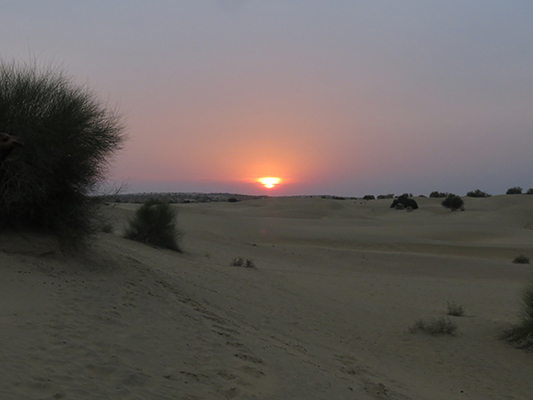 Drivers getting ready to cook. 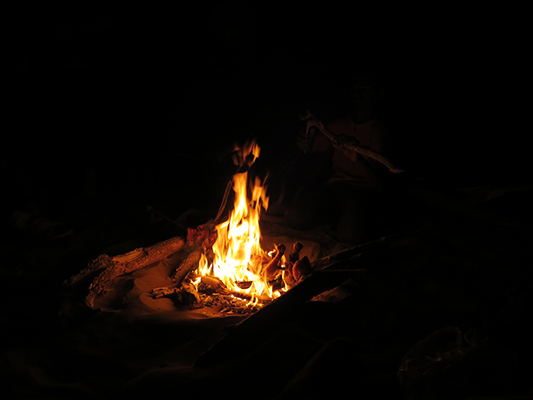 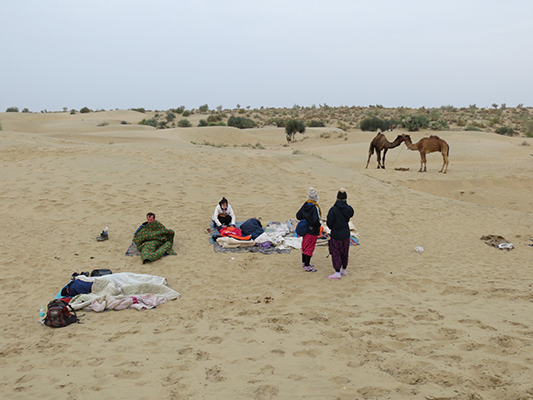 The bedroom at camp.

Chilly morning, didn’t want to get out of bed. 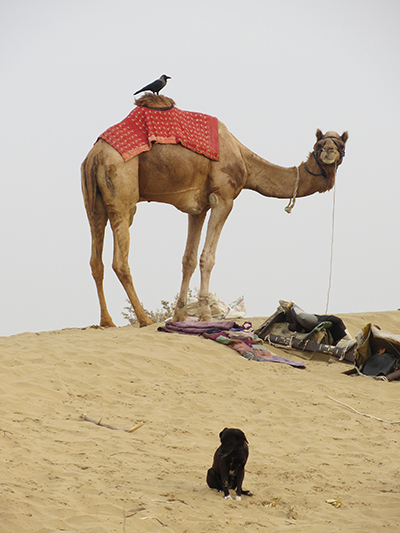 Good news, no one got trampled over the night. The drivers cooked breakfast for us, which was pretty pathetic. It consisted of tea and chapati. Not very filling. Dave and I brought cookies we didn’t eat the day before so we had cookies for breakfast too. Not sure why mom doesn’t think that’s a good breakfast… 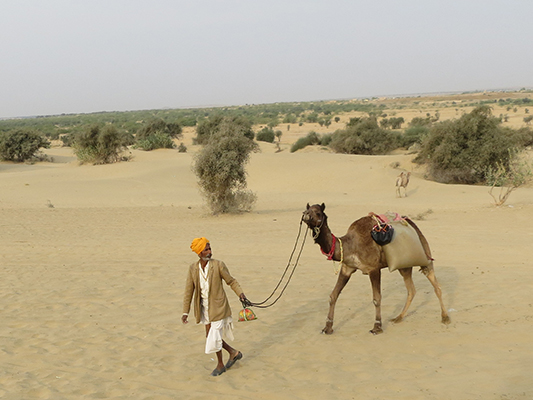 This guy was not part of our group. Check out his sweet turban.

Another big reason it was the perfect amount of time for me was because one of the camels was in heat. I know heat isn’t the correct term because it was a male camel, but he was in the mind set of attracting and finding a female camel to mate with. This consisted of foaming at the mouth and ballooning this large and very disgusting sac from the side of the camel mouth. This wouldn’t have been so bad, but the camel belonged to the same camel driver as my camel. So the mate attracting camel rode right next to my face the whole time. Anytime the camel needed to move away from a tree the foamy, stinky mouth was inches from my face. Also, at one point, the gross sac that comes out the side of the mouth ballooned inches from my face. I winced and the camel driver put his hand between my face and the sac until the camel decided to suck it back in. But, “don’t worry Sarah, he won’t bite” was my assurance from the camel driver. HA. Like I was concerned with that. I was focused on not getting foam on my clothes or in my mouth and to not get slapped in the face with a mating sac. Yup, definitely the perfect amount of time.

Inches from my face…

We couldn’t get a picture of the sac, but i borrowed this one from the web.

After the camel safari, we headed back to Jaisalmer and into the fort. Jaisalmer is one of the few, if not the only, places you can stay inside the fort. It was very awesome to be inside the fort the whole time. We noticed here that the people are more friendly than we’ve experienced in other places of India. We had many conversations with locals who owned shops, hotels, or restaurants and just wanted to talk rather than talk to make the sale. It was nice. We spent a good hour or longer in a jewelry shop talking to the owner sharing stories about the different cultures. He even gave us some of his cadbury chocolate. We didn’t buy the ring his shop is famous for, but he didn’t seem to mind just hanging out. This was our second stop in Rajasthan and we can tell from interacting with the people why it is such a popular tourist area in India. It was a fun place to spend a couple of nights. 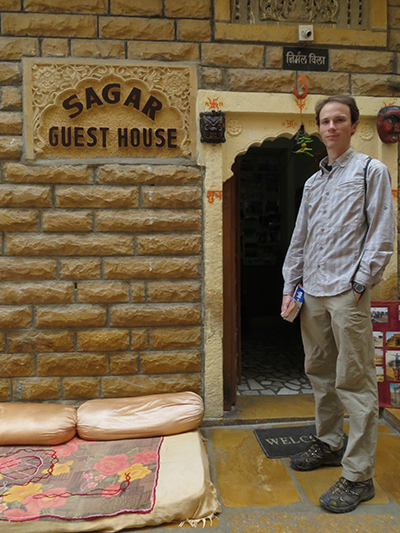 Dave outside our hotel.

Mind your head. We come across these all the time. Never stops being funny.

Washing clothes in a bucket. We hate doing it, but it’s a must. 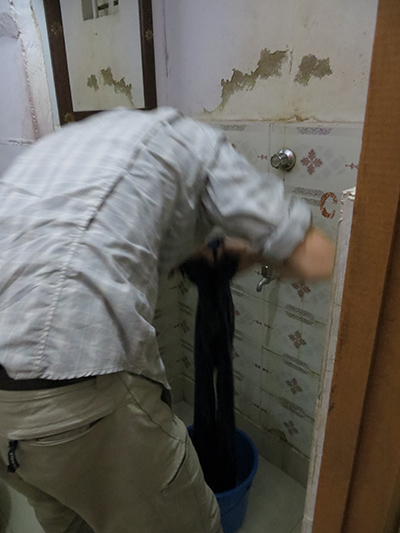 From the fort looking over the golden city.

2 thoughts on “Camel Safari and Living in an Old Fort”