Posted on April 1, 2013 by peachandbones

Though tempted to spend another long while relaxing in Pokhara after returning from the Annapurna Circuit trek, we decided it was best to check out other areas in Nepal. Additionally, we only had a couple of weeks left in Nepal before our planned departure. We would be flying out of Kathmandu on April 2nd. So, on our way to Kathmandu we decided to check out the town of Bandipur, which is located just off the main road between Pokhara and Kathmandu. No major detours were necessary.

Bandipur is a quaint town with quiet, vehicle-free streets and friendly people to boot. Our guidebook describes it as “a living museum of Newari culture”. Since I’m not an expert on Newari culture I can’t really say whether that statement is true or not, but in terms of a living museum I’d have to agree. Nearly all of the buildings in the main bazaar area are beautiful, multistory brick buildings, many of which have beautifully carved window frames and doors. Their construction supposedly dates back to the 18th-century. The “street” in front of the buildings is more like a patio, since there are no vehicles and much of it is lined in large flat stones.

View of the main bazaar of Bandipur from above.

One of the kids greeting us as we arrived in Bandipur. They usually offer a “Namaste” followed by “Chocolate?” 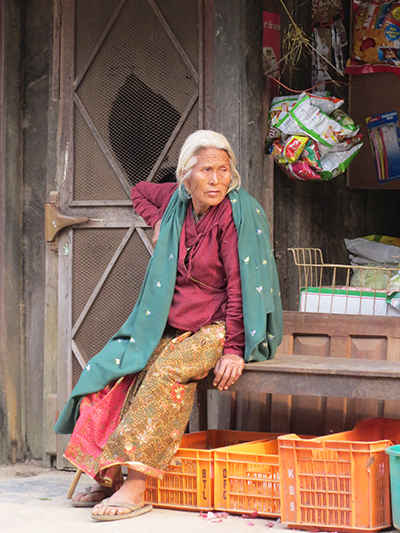 Lovely old lady doing her own people watching in front of her store. 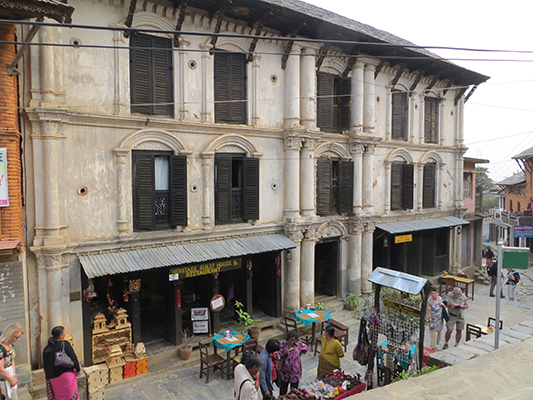 Outside of our hotel. A very nice place, though, the beds were a little hard. 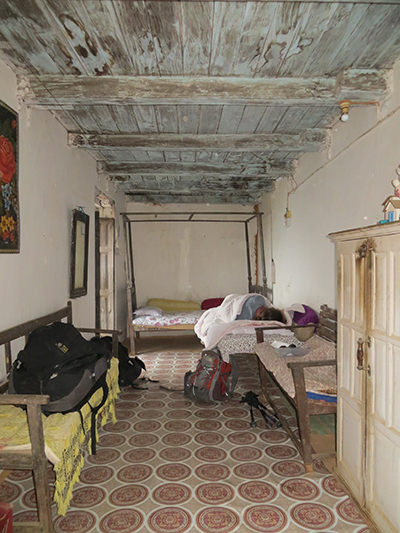 We opted for this room because of the views.

Window in our room.

View from our room.

The vibe of the town was very relaxing, allowing Sarah and I to enjoy most of our meals on the front porch area of the local restaurants. This usually isn’t an option since most of the towns we visit have lots of vehicle traffic, usually kicking up dust and making a lot of noise. One of days we took a walk to some of the nearby villages to get a closer look at the terraced fields and farm houses. Though Bandipur sees a lot of tourists, many of the people in the area still work as farmers.

House of one of the local farmers. 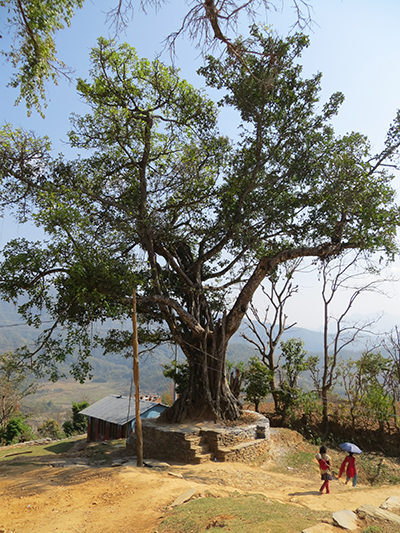 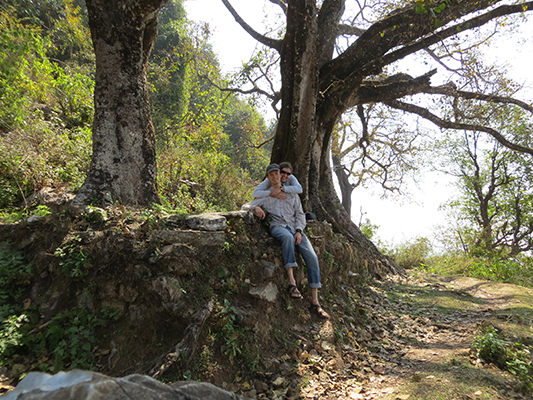 Taking a rest under a bodhi tree. 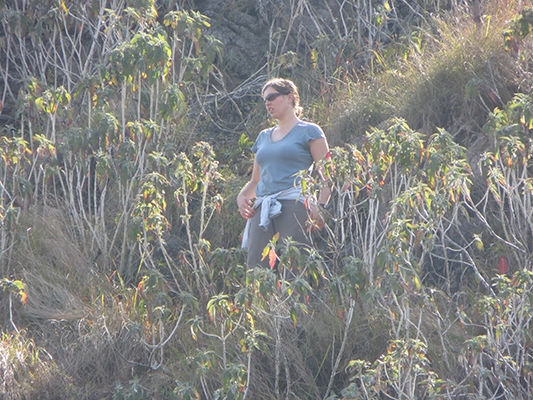 Sarah trying to figure out the safest way down to the main trail. 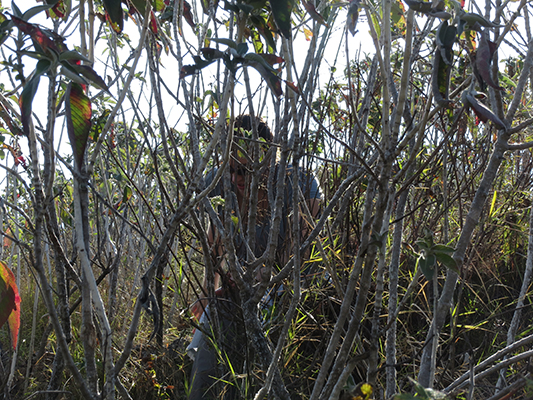 Sarah making her way through the brush. I think we got a little off course.

Panoramic from the hike.

Farm terraces below and the snow capped peaks in the background.

Our last day there we had an unexpected treat provided to us by the sister of the hotel owner. She has an interesting hobby of dressing tourists up in local attire. On her day off she invited Sarah to be a part of her dress-up session. Since she didn’t have any mens clothing for me, I documented the process Sarah went through to become an Nepali bride. 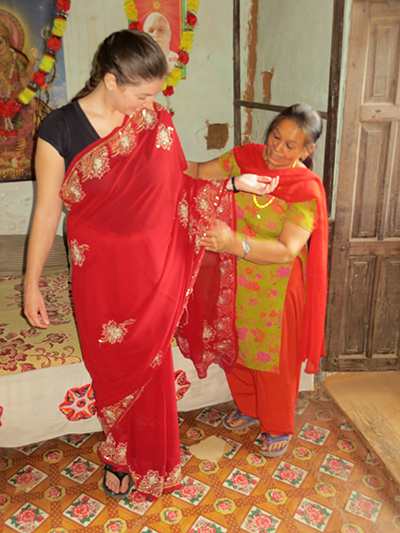 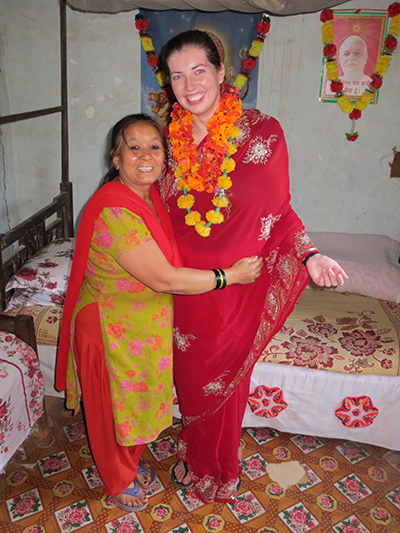 The woman drew blood while forcing these bangles on Sarah’s hand. This didn’t stop her from putting a few more on. 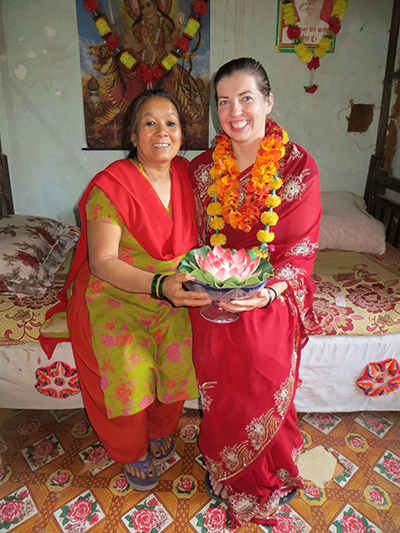 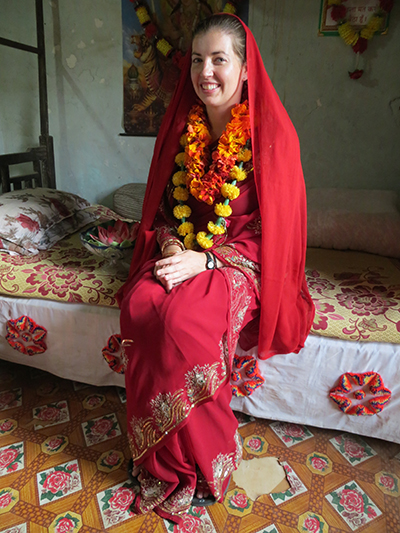 Our next stop after Bandipur was Daman. It was described as having possibly the best views of the Himalayas. There was no direct bus from Bandipur to Daman, so we took a bus from Bandipur to Dumre (20 minutes) and then hopped on a bus enroute to Kathmandu, but jumped off at the town of Naubise. From there we planned to catch another bus to Daman. After the usual exercise of asking a handful of different people to narrow in on the right answer, in this case where to wait for the bus to Daman, we sat and waited for about an hour.